This letter was written by John H. Dingee (1844-1894) of Ulster county, New York—the son of Enoch Dingee (1814-1872) and Maria Jane Freer (1813-1888). John enlisted as a private in Co. A, 124th New York Infantry on 25 July 1862 at Newburgh, whereupon he received a bounty of $100 from Ulster county. According to his military record, he was in the battles of Fredericksburg, Gettysburg, and “all the battles with Grant till the surrender of Gen. Lee.” He entered the service as a private and mustered out in February 1865 as a sergeant.

John does not give his location when he wrote this letter in November 1863 but it’s clear he was hospitalized somewhere—most likely in northern Virginia. He datelined the letter 1862 but it should be 1863 as the regiment had been in White Sulphur Springs in August 1863. He wrote the letter to Henry M. Cannon who had previously served in the same company but who was discharged for disability in February 1863.

Henry, I have not got much new to write at present—no more than to let you know that I am to the hospital again and I am in hopes that I will soon go to my regiment for I have not heard from them since I left them at Sulphur Springs. I have written to my company but I have not received an answer yet.

Our board is not as good as it was before I went home. There is not many here to the hospital now and I feel very lonesome. I went out to a farm yesterday and got my dinner. We can get meals here for 35 cents and very good at that.

This is all I can think of at present. Perhaps I can think of more next time. Write as soon as you get this and let me know if you have seen anything of Charles Kolgne [Kline]. ¹ He went home last winter and hasn’t got back yet. No more at present.

My love to you. From your friend, — John H. Dingee

¹ Probably Charles Kline of Co. A, 124th New York Infantry. He deserted at the end of his furlough in April 1863. 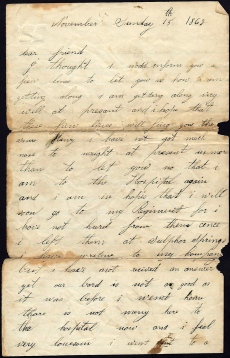 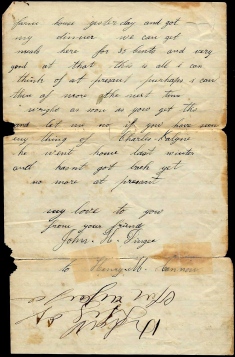