Charlie served in Co. D, 20th Ohio Infantry. The regiment was formed in October 1861 and was located in Cincinnati at the time mentioned in this letter. An on-line account by Pvt. Samuel Churchill of the 20th Ohio Regiment seems to coincide with the description of events outlined in this letter.

After the war it appears that Charlie took up farming near Bloomington, McLean County, Illinois and married Hanna Maria Cravath (1846-Aft1920) on 3 July 1872. Maria was the daughter of Myrtillus and Polly Cravath of Pittsfield, Michigan; later Bloomington, Illinois.

The couple eventually relocated to Fort Scott, Bourbon County, Kansas, where Charlie became a nurseryman. His last residence (1910) before retirement was in Parsons, Kansas, where he worked as a teamster for a dairy. He is enumerated in the 1920 Census residing in the household of his son, Ernest Fay Carpenter (1873-1852) in Center Township, Vernon County, Missouri. Ernest was married to Agnes D. Estes (1873-1953). Pension records suggest that Charlie died in 1925. 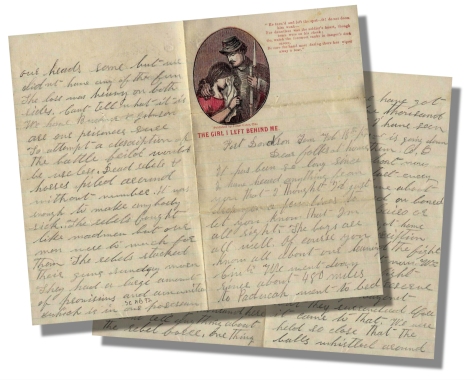 It has been so long since I have heard anything from you that I thought I’d just drop a few lines to let you know that I’m all right. The boys are all well. Of course you know all about our leaving Cincinnati. We went down river about 480 miles to Paducah, went to bed and next morning found ourselves going up Cumberland river to the fort where we are now. The gunboats were playing on the forts finely when we got here. They were not long in silencing the guns at the fort but then the work was not quarter done. The fort is as strong a one as the rebels have and then their entrenchments extended about five miles down the river. They would come out and fire on our men and then retreat to their ditches. We had a force of about fifty thousand here. I can’t tell anything about the rebel force.

One thing certain, we have got ten or twelve thousand prisoners for I have seen them. Our regiment is going down river with them. Co. B is on board a boat now expecting to start every minute. We have about twelve hundred on board. They are going to Cairo or St. Louis.

If I was at home, I could give a description of the fort and the fight but I can’t do it now. We were not in the fight. We were held in reserve for a charge bayonet but they surrendered before it came to that. We were held so close that the balls whistled around our heads some but we didn’t have any of the fun.

The loss was heavy on both sides. Can’t tell what it is. We have Buckner & Johnson are our prisoners, sure. To attempt a description of the battlefield would be useless. Dead rebels & horses piled around without number. It was enough to make anybody sick. The rebels fought like madmen but our men were too much for them. The rebels stacked their guns Sunday morn. They had a large amount of prisoners and ammunition which is in our possession.