The 9th Maine Infantry was organized at Augusta and mustered in September 22, 1861. It proceeded to Washington and briefly served in the Washington Defenses before joining the expedition to Port Royal, SC, attached to the Department of the South. The 9th Maine participated in a number of minor combined operations resulting in the capture of Forts Walker and Beauregard and later occupied Fernandina, Florida. The regiment then shifted to operations at Charleston arriving at Hilton Head in January 1863, assigned to the 10th Corps. Ira must have contracted an illness about this time for he was sent home where he died on 19 March 1863 in North Paris.

As I have an opportunity to write you a word before the mail leaves at ten o’clock in the forenoon. My health is good and I am enjoying myself very well although I may not enjoy myself in a short time from now.

Probably before another letter reaches you from me, we shall be attacked. How we shall come out, I cannot tell but time will decide. There are any quantity of rebels across the creek from us bit how many, I do not know. They have threatened us hard and we have expected an attack every night for some time. Some nights they come over and fire to our pickets but have not killed anybody yet. I believe myself that every citizen here in the place is a pure rebel at heart and would cut our throats in a minute if they dared to do it. And if we had any kind of an officer at the head, he would have everyone shot or imprisoned. But as you well know, we have got just no officers at all and if we are attacked with much force, we shall surely get cut up.

But I do not want you to be down hearted at all for they may never attack us. But as the case may be, I am ready and willing to take my chance with the rest and fight until every drop of blood shall flow from my veins.

The news are tonight that our men have had a brush at Charleston [Battle of Secessionville] and got defeated on the account of that miserable Gen. [Horatio G.] Wright not reinforcing Gen. [I. I.] Stevens as he agreed to. I believe him to be as much as half rebel and more too if the truth should be known about him. I guess you will think that I am down on the officers generally. Well, brother, it is about so for I have but very little faith in the most of them—especially the officers in my own regiment. I wish I had more.

I am waiting anxiously for a mail to come so I can hear from Richmond and other places to hear the general news but I shall have to wait patiently. The weather is very hot here and has been for some time. Such hot weather I never seen anywhere as I have here within a few days. The thermometer stood 128 degrees yesterday in the shade, so you can judge that it is some hot. I wonder if that would not be hot enough for the old man or would he say it is about right?

I wrote to you in a letter to Jane to send me a box of things if you would. If you send it, you will do me a great kindness. I must now close for it is getting late. I will put in a few water melon seeds. Goodbye, — Ira W. Bisbee 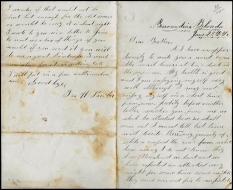