This letter was written by a New York State soldier with initials that appear to read, “C. R. P.” or “O. R. P.”  Most likely he was a member of a Heavy Artillery regiment as he says in his letter that his regiment is now being used as infantrymen. Historians will recall that Grant took many of the Heavy Artillery regiments from out of the forts surrounding Washington D. C. to participate as infantrymen with him in the 1864 Overland Campaign.

The author indicates that has just arrived at Camp Distribution near Alexandria, Virginia, from Elmira, New York, where he likely rendezvoused with others from his regiment that were returning from a Veteran’s furlough. We know from the letter that his regiment had previously served under General Sedgwick so he might have been a member of the 4th New York Heavy Artillery. He mentions too that he was sending an Express receipt to Scio which is a small town in Allegany county, New York.

I have tried to search for his identity using the names of his apparent siblings in the letter but have not been successful.

Camp Distribution near Alexandria
May 13th 1864

It is with pleasure that I now seat myself to scratch a few lines to you to let you know that I am well and hoping this may find you all well. You see I am once more on the Sacred Soil. We started from Elmira Tuesday, 3 o’clock A.M. and stayed all night in Baltimore. The started Wednesday at eleven A. M. and got at Washington at two. Stayed at the Soldier’s Relief and today—Thursday—came over here. Arrived half past ten o’clock A.M. So here I be in very good quarters. we don’t know when we shall leave here.

Well, I received one hundred and twenty-five ($125). I have express[ed] one hundred dollars to you, William, to save, and enclosed find receipt for the same.

Well, it has rained some here today. The war news is good. We are a whipping the rebels but I tell you all, I feel bad about one man that was killed. That is General Sedgwick, my old general. We have lost many a brave men and noble officers but Richmond must fall, I think, this time. I don’t know where our regiment is now. They are acting as infantry now. I would like to see you all first rate and hope I shall soon for I think this war will soon be over.

Now William, I want you to use this money to best advantage. You can give Rosel five dollars and Mahala the same if she wants it. Rosel, I will give you more before long, I think. Now be a good boy and do the best you can. Alonzo, I would like to see you but be a good boy and mind Ma and Pop. Ma, I hope you are well and taking comfort for I know you must. You may think I am not fair but if you want anything, have William give you money to get it, Now Pa, I tell you it looks natural here. We had a very pleasant trip Everything is in bloom. Corn is up and so is the spring grain. How is it about the spring grain of yours? I guess it is not up now. If you want anything, William will give you the money to get it.

Now my love to you all and my best wishes, and let us all trust in Him who doeth all things well that we shall soon be together again. Now I think you had better not write till you hear from me again. So goodbye for this time. From [Corp?] to you all.

I put the receipt in here but it is to be full so I will direct it to Scio [Allegany county, New York] in another envelope. 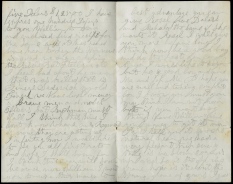