William mentions two of his sons entering the Wisconsin Volunteers during the Civil War. His son Willie (1843-1917) enlisted on 17 April 1861 in Co. K, 1st Wisconsin Infantry for three months service. He afterwards enlisted in Co. E, 23rd Wisconsin. In September 1864 he was taken prisoner and spent some time in Andersonville Prison but survived the war. Another son, Herbert Roderick Bird (1849-1915) entered the war on 25 August 1862 as a 13 year-old drummer boy in Co. D, 23rd Wisconsin. He later served in Co. K, 20th Wisconsin.

According to census records, in 1860 William worked as a teamster in Madison, Wisconsin. In 1870, William worked as a launderer and his wife as a house maid at the Insane Asylum in Westport township, Dane county, Wisconsin—positions they presumable started in the early 1860s when these letters were written. The facility opened in July 1860.

I write you a line in a hurry just to inform you that Willie is enlisted in the Gov. Gurd’s Company and probably will be on the same train this letter comes by. I wish you to see him. And it may be that he may want to leave some of his clothes with you. They do not have their uniform till they come to Milwaukee. If he should want to send anything back, you will please pack them up in a small box and address them to me at Insane Asylum, Madison. I shall probably see him before starting. His mother feels very bad about it. Don’t you think George will be in the midst of them? Now you will be sure to see Willy and I hope you will write back the particulars when and how they left Milwaukee. Please send me a Milwaukee paper likewise. No doubt you take them. This in a great hurry from your affectionate friend & Uncle, — W. Bird

How do your folks at home do for they won’t write to me. I wrote some time ago. No answer.

P. S. When you write me again, address Insane Asylum, Madison. Willie used to attend to my letters. Love to James and especially your aunt.

I now write confidentially about Herbert Roderick. He has written me last week to borrow money to take him to Chicago. Says he cannot possibly find a situation in Milwaukee. Now I want your opinion of him freely and you may rely upon me keeping it within the bounds of our own family. I suppose he stays with you. He does not say anything otherwise. Has he borrowed money of you or has he promised pay for his board? Now I want to know this in particular. Or have you any claim on him whatever? I have a particular reason for asking you these questions. I will let you know all about it in my next. I have had a letter from his Aunt in England but don’t drop a word to him. I wish you to write by return mail if possible. Don’t let him know you got this if you can help it. So much on that. Only I want to hear from you before I answer his letter.

Now dear Nephew, I must enquire about Mrs. Rice. I hope she and you are well, enjoying health, and the blessings of Providence. How is James? I want another letter from him. Now George, I do particularly wish to hear how he is and where he is. Roderick informed me of his arrival in Milwaukee with your mother in a state of great weakness. It is no use to write to your father to know for it takes him about six months to answer a letter to me. You never got Uncle Edward’s photograph taken for us. Will you please do so? Your Aunt is very anxious to get it.

Enclosed please find my photograph. Your Aunt is going to have some taken. Then I will send you one of hers. In the meantime, you must send us yours and your wife’s. I should like to get James’.

We are all enjoying our usual health. Have pleasant times here notwithstanding it is an Asylum. Had a picnic on Wednesday last half a mile from the building on the lake shore. The Milwaukee Brass Band was out here playing for them. I wish you and Mrs. Rice would pay us a visit once in a while we are here. I am sure you would enjoy yourselves. We have a pleasant place here in summer and if you could stop over Sabbath, you should preach to the congregation. I suppose you do preach in English.

I have written you longer than I expected when I commenced. So goodbye for the present. Love to your wife. Accept the same yourself. From your affectionate Uncle, — W. Bird

In my paper of the 30th, among the sick and wounded soldiers of Wisconsin, I read the name of Griffith T. Rice of Co. K, 28th Regiment Wisconsin Volunteers who died at Yazoo March 19th. I did not know the regiment Griffith was in. Neither did I know there was a middle letter in his name. Yet I suppose it must be your brother. ¹

Your Father and Mother will take it very hard. My respects to them when you write. Also my wife’s. And should be pleased to hear from you as quick as you know whether or not it is your brother.

I see by Willie’s letter you write to him so I will say nothing about him. I had two letters from Herbert last week. He received 3½ months pay and sent $40 home and says that is a “pretty good pile for such a little shaver as me.” He kept from 10 to 15 pocket money. He says he has seen some pinching times. They are 20 miles from Vicksburg now in a fine pleasant, healthy camp. He says Vicksburg is a nasty place. Have you heard anything of H. Roderick lately? Can you give me his address?

How is Mrs. Rice, Anna, and James? Our love to them all. Accept the same yourself. From yours truly, — W. Bird

¹ Griffith T. Rice served as a private in Co. K, 28th Wisconsin Volunteers. His date of death was given on 20 March 1863 in the headstone application; the headstone was to be shipped to Wales, Waukesha county, Wisconsin. His grave marker was set in Salem Cemetery in Wales. His parents were Roderick Rice (1809-1888) and Mary Griffith (1808-1892), emigrants from Wales. 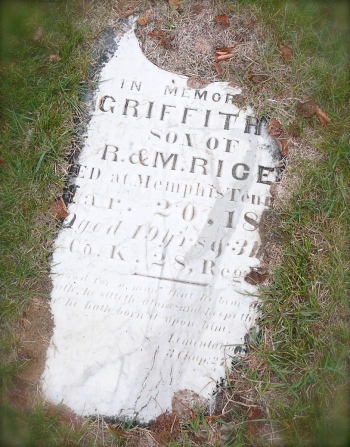