Although the Hege family were members of the Moravian Church and opposed to the Civil War, Constantine was obliged to enlist in the Confederate Army. He served for 14 months in Co. H, 48th North Carolina Infantry Regiment, before being captured on 14 October 1863 at the battle of Bristoe Station, Va. After being released from the Old Capitol prison in Washington, D. C., he worked in an iron mill in Bethlehem, Pa. When the war ended, he moved to Salem, N. C., where he started Hege’s Salem Iron Works. In 1877, he obtained a patent for a set of works for circular sawmills, making his iron works known across the country. Hege married Frances Mary Spaugh in 1870. The couple had three children: Walter Julius, Ella Florence, and Rose Estelle.

We received a letter yesterday from you dated May the 30th which we were all glad to hear from you. You said that you hope that Julius is well again. He is well. He is busy a playing with Solomon Teshe’s boy and the rest of us are well at present. I was at meeting at David today. Mr. Dorep preached. We heard that your brigade had left Kingston [Kinston] to go to Virginia but I don’t hope that you are gone for mother is fixing thing to take to you. She and Mr. [David] Weisner and Caty Weisner are going to start tomorrow morning.

We received a letter from you just now dated April the 3rd and heard that you have not left Kinston and how glad we were to hear that you were there yet so that mother could bring you something to eat for I heard that some of three 15th Regiment writes that they could eat all the provisions at one meal that they get in two and they want their friends to send them some for they say that they can’t live that way.

You said in your last letter that you would be glad to see Mr. Rights come to see you but he can’t come with mother but Mr. D[avid Weisner] and Miss C. Weisner are coming along with her. Here, me and Julius send our [ambro]types that you can see them if you want.

Now I will tell you something about home. The sarvases are a getting ripe but the cherries are not ripe yet. The mulberry are ripe now. The strawberries are almost all gave. We have eight little ducks and sixteen little guineas and sixty-five chickens.

I went to Mr. Berier and got some goose quills for you and there heard that them that hired substitutes in the draft will get clear and I wish that it would be so. Then you would get clear and could come home and stay at home.

So I must close by saying please write soon.

Your affectionate sister until death, — May L. Hege 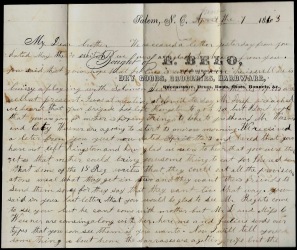