This letter was written by Rowland A. Wheeler (1847-1916), the son of Abram Wheeler and Angeline A. Taylor of Shelby, Orleans county, New York.

Your last [letter] came to hand last night and found us all well. Wm. had an oyster supper Tuesday night. We had a good time. I have had so many oysters since I have come out here. I have got so I like them now.

It is raining today. Wm. went a hunting but do not know whether he got anything or not. I am the only clerk he has got now since Johnny went away. I heard from him the other day. He was a little better when he wrote but not enough to speak of. He has not been out of the house but once since he went home. He may get well again and may not.

The boys are enlisting very fast here now. It was lucky that your regiment went away just as they did for if you had got down to New Orleans, you would have thought of home more than once when them mosquitoes get hold of you that are as big as a yearling heifer.

I have been over to dinner and it does not rain much now. Borden is got to be Captain Hicks now but he had to enlist for three years again. ¹ I received a letter from Mary the other day. She said that Father and herself had been to Rochester and Father told Sands to come after them at seven o’clock and instead of going after them, took the team and took a load down to Baynes and they would have had to stay there all night but Mother got Clarence Gregory to go down and get them. If that is the way he acts, Father will not be very apt to come down. I should not think he would feel much like going if he acts like that.

School does not keep but six weeks more and that will go off pretty fast. I suppose that the farm will be worked next summer, if it ever was, and by next summer when you come back we will hire you by the month and board you besides. I will close by sending love to all and all write soon. From your brother, — Rowland A. Wheeler

I did not get any letter from home tonight. 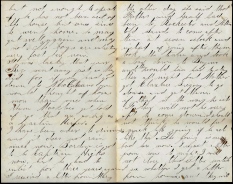