Charles graduated from Middlebury College in 1860. He enlisted on 8 September 1864 in the 6th Vermont Infantry, Co. C.  He was killed in action at the Battle of Cedar Creek on 19 October 1864—less than a month after this letter was penned. He was buried in the Winchester National Cemetery, Grave No. 4232. His cenotaph stands in Mechanicsville Cemetery in Mount Holly, Rutland county, Vermont.

A notice of Charles’ death was published in the 8 November 1864 issue of the Springfield, Republican [Springfield, Mass.]:

Among those who fell in the terrible battle of the 19th of October in the Shenandoah Valley, was Charles Parmeter of Windsor, a young lawyer who went as a substitute, furnished by Hon. Justin S. Morrill. He arrived at the front on the 16th, and his body was found on the 19th, shot through the heart.”

Charles wrote the letter to Hon. Justin Smith Morrill (1810-1898)—the man for whom he served as a substitute—and a member of the US House of Representatives. A substitute was generally hired by a man who was drafted and did not, for a variety of reasons, wish to serve in the military. If this be the case, it is not clear why Charles would be identified as a substitute for Morrill because the judge was clearly beyond the maximum age of 45 and was therefore not eligible for the draft. Likewise, both of his two sons were too young for the draft. Digging further, I discovered that many Congressmen hired a “recruit” to serve on their behalf. Charles was selected by Morrill and most likely earned a bounty proffered by the Congressman.

We reached here about ten Tuesday night and in the lower division of a barracks had the first night’s experience of soldier’s life. There were here about fifteen hundred, three hundred and forty-two left last night. A motley crew—all sorts and conditions—some good, some bad and some babyish. It takes communion, acquaintance and discussion to make us forget present associations and surroundings and feel as we ought to feel. To herd with the worst of humanity—pickpockets, “bounty jumpers”—worthless to themselves and the government—to live under the vilest of language—to hear continuous grumbling and fault-finding—to feed upon what the government never intended we should—to be under those who stripped of a little brief authority would not bear as much pressure as a puff ball—might make us wish ourselves anywhere else did we not look beyond to what is to be done—that some must do it and that in the future we shall be glad to have aided in doing it.

People told me, “you are all right. You will not have to carry the knapsack,” and my friends would like to have me try and get detached through some favor to some duty not of much danger. Now, I do not propose to do any such thing. If duty calls me where bullets fly, I shall go there. There are too many already who are willing to serve where there is no risk. I have tried to look it in the face and while I am able, shall carry the musket if there is where I belong. And should it cost me an arm or leg or life, let it come.

We will be likely to remain here next week. We have little of active duty and as yet scarce any drill that is worth anything.

Stating here I wish to get out and go over the city which is pretty difficult to do. If you will send me a letter saying you will be responsible for my reappearance, it will probably secure me a pass. If you can conveniently do so, you will greatly oblige yours truly, — Charles Parmenter, 6th Vermont Regt. 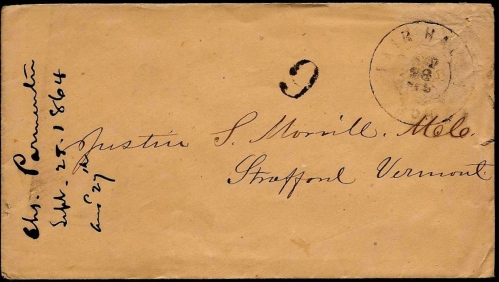 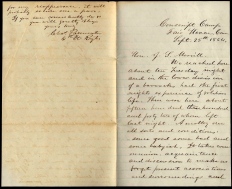