This letter was written by Lt. Col. Henry Czar Merwin (1839-1863) of the 27th Connecticut Volunteers. Henry was the son of Samuel Edwin Merwin (1807-1886) and Ruby Nearing (1808-1886) of Brookfield, Fairfield county, Connecticut. The outbreak of the Civil War found Merwin living in New Haven and operating a business with his father and brother. As a member of the New Haven Grays militia, Merwin immediately volunteered for 3-months of service with the 2nd Connecticut Regiment, serving as a sergeant. With the 2nd, Merwin first saw combat during the battle of Bull Run. In the summer of 1862, Merwin recruited what would become Company A of the 27th Connecticut, and was subsequently elected Lieutenant Colonel of the regiment. In this position Merwin served at both Fredericksburg and Chancellorsville, becoming a prisoner of war held in Richmond following the latter battle. Upon being exchanged, Merwin swiftly returned to the regiment, assuming full command. Leading the 27th Connecticut into the Wheat field at Gettysburg on 2 July 1863, Merwin was shot down, mortally wounded. Eye witnesses recorded his last words as: “My poor regiment is suffering fearfully.”

Yours of the 22nd just received.

I am very glad to hear you have sent a box to Uncle John for it will do him lots of good. He is very lucky to be in such a good place this winter. I hope his regiment will not have to move.

We have not received any Express in a long time. There is no use trying to send as no telling whether it will be received or no.

Le Roy & Keeler have gone to some hospital, I suppose, to Washington. I think they will get discharges or get furloughs. Le Roy said he would write me so I will know where they send them. Keeler was getting along well.

I hope you do not believe all you hear. I see by the scrap of paper you put in my letter our army had moved and we had no doubt whipped the enemy. Do not believe all you hear. We hear Hooker is in command of the army and that Sumner and Franklin are relieved of their commands. We hope the day is not far when George B. McClellan will be in command of the army.

Mr. Mansfield gave our regiment 111 barrels of apples—also oranges & lemons. He is a good fellow.

Love to all. Tell Mother to write often and give me my box in letters. Is Father’s health as good as usual? Have him send a word now and then by you if he does not write. 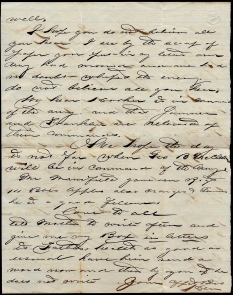 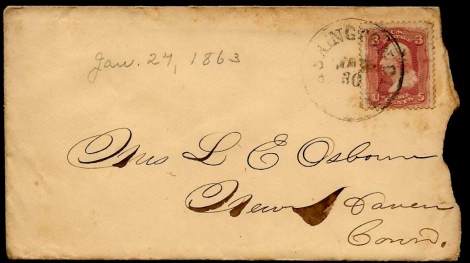