This letter was written by 29 year-old William Kershaw [Kirshaw] (1832-18xx) who enlisted on 26 August 1861 into Co. K, 49th New York Infantry. He mustered out of the service on 23 November 1862 at Alexandria, Va., discharged prematurely for physical disability.

I have just received your kind letter dated on the 8th and was glad to hear from you and to learn that you are well and hope these few lines will find you all the same as it leaves me at present. I don’t know as I can write anything very interesting but I can give you a detail of what we have to do and what we are doing now. I was out on picket when your letter came in but I got it this morning. I went out Sunday morning about 3 o’clock and came in this morning at 7 o’clock. We have to stand picket guard and home guard from two to three times a week 24 hours at a time so it comes pretty hard on us losing so much sleep and it is pretty cold too nights. And when we go on picket we have to take our provision with us and cold bread and meat goes rather tough, but we have to get used to it. But we get plenty of it no so we stand it much better than we did at first.

I don’t see as there is much more prospect of a fight than there was a month ago nor so much for we did expect a fight. We went out on a foraging expedition a few days ago and brought in 125 loads of grain and fodder and drove in the enemy’s picket and the whereabout 5000 strong within 3 miles of us but as soon as they saw our cavalry advancing, about faced and scattered for the woods so we did not get a shot at them at all and we could have captured about half a dozen pieces of artillery if our leaders had not made a blunder of some kind for when they saw us coming, they were in such a hurry to retreat, they cut their traces and mounted their horses and left their artillery behind them. But I cannot find out what the reason was we did not pursue them for we were in good condition for a fight and we were as strong in numbers as they were.

Two companies of our regiment are gone out on a scouting party today and I wish I was out with them for I want to either fight or do something towards driving the Rebels out of the country. We have had two men shot on our picket lines but not seriously wounded and we have lost two by disease but none of our company. But there is quite a number of our company sick. Some have got the measles but as a general thing, our regiment is as healthy as any around here. We stand it better than the Vermonters and the Maine regiments. They are dying off very fast.

As a general thing, we are doing very well but they drill rather too much, I think, for the benefit of our health. But we have to put up with it. But the little fellows stand it the best. I won’t turn my hand over to the best man in the regiment either on a march or anything else. If I can have my health, I don’t fear anything in the shape of work nor even the rebels themselves. And I thank God he has spared me thus far and hope and trust He will be with me to the end. And I live in hopes if I never should meet with you again in this world, I shall meet you all in that brighter world above where we shall never part again.

I have heard of the death of James and I feel to mourn with you all for I would like to have seen him again. But it is decreed otherwise. Yet I hope to meet him again.

Clark Hazeltine ¹ sends his best respects to you all. So no more at present—only my best love to you all and give the same to Uncle Pero and tell him I would like to have him here on Sunday to preach to us though we have a very good chaplain. Give my best love to all of Mr. Shaw’s family.

I remain yours, — Wm. Kershaw

Write as soon as you conveniently can.

¹ Clark S. Hazeltine enlisted at the age of 23 in August 1861 at Jamestown to serve three years in Co. K, 49th New York Infantry. He mustered in as a sergeant and was returned to the ranks on 1 March 1863. 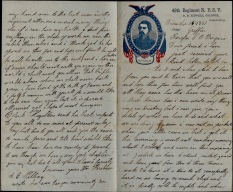 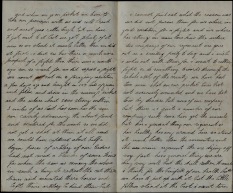