After the Battle of Stone River, the 64th OVI remained on duty at Murfreesboro until June 1863 when they advanced through the Cumberland Mountains on the Chickamauga Campaign. Samuel was wounded at Muddy Creek, Georgia, on 18 June 1864. 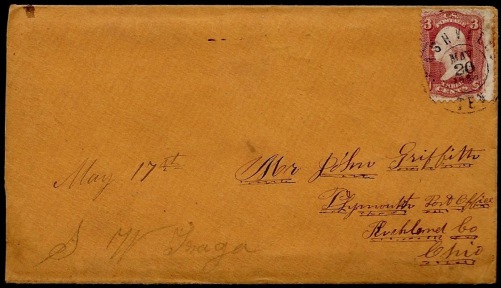 Camp Near Murfreesboro [Tennessee]
May 17th 1863

I take my pen in hand to inform you I feel quite well for me for I have been troubled some time with chills. I have got them checked and hope I will come off conquerer and not have them again. I received your letter of the 27th of last month. I was glad to hear you were all well and able for the enjoyments of this world’s blessings.

It is Sunday morning—one of those pleasant, warm, beautiful days of which we have a great number of in this state of Tennessee. This is a beautiful country and one I would like to live in was everything suited to my wishes. It puts [me] in mind of California so much and it is very much such a climate with exceptions. It rains here through the summer season. In that, [it] is better than California. It keeps vegetation growing through  the summer. We have no very warm weather yet. It is warm but not excessive heat as I expect we will have to stay here all summer which I think we will do unless the rebels drive us away which they say they are going to do. If we have to fight them in this state, I hope they will come on for I think we are well fixed here to give them a good reception and most glorious defeat.

Everyday is making this place stronger and more impregnable. We are all busy doing something too build this place up to proportions of strength and durability. There is three sawmills in running order and cutting lumber quite fast. The fourth mill is here and will be ready to run in the course of a few days. There is some four inch plank sawed that is used for covering the block houses or stockade of which there is quite a number. It is the supposition around as it possible they will saw lumber to barracks for the soldiers inside of the fortifications.

The 64th and 65th have very good quarters at present, We have log cabins for each mess 10 by 16—large enough to accommodate two men each. Company H has their covered with clapboards and doors taken off a secesh house that cost three thousand dollars. Some of the boys have the window blinds for doors. We have some of the carpeting laid down on the ground. We have no floors in cabins. These are some of the bounties of war but these are nothing when one gets used to it.

I expect you all feel somewhat disappointed in the battle that came off lately in Virginia [Battle of Chancellorsville]. It has not been a defeat—neither has it been a victory. I think we despoiled them more than they did us. We must never give up. We are fighting to sustain laws and institutions of a great nation and we must sustain then in every emergency. The greater the reverse, the more we must bear up against it. Conquer or die! Let that be the motto of every true and devoted citizen and soldier the country over. The man that does not feel so under the present circumstances is not a true man to his country and his God.

We all rejoice to hear of the downfall of that arch traitor and fiend Vallandigham of Ohio. He has received his merit but not such as the soldier would like to mete out [to] him. They would like to have the privilege of hanging him a little. That is the kind of doctrine they would like to teach him.

My best wishes to you all. — Sam W. Trago

Write soon. Tell Lucinda and Jane to write me a letter & I will try and answer them. Do not forget to write soon—one or both at different times.

Camp near Murfreesboro
May 17th

I received a few lines from you the other day that was written in Sister Mary’s letter. I was glad to learn that you thought of me and hope this will find you enjoying your childhood sports with all the joy your young life can possess. I expect you had a good time when you were up to Grandfathers and more when went down to see Alta. You must go up and see Alta as often as your parents are willing for you to go. You must not tease your parents for anything too much. When you ask them properly for anything, they will give it to you or allow you to have it if they think you ought to have it. Give my good wishes to Milton and keep a good share for yourself.

From your Uncle, — Sam W. Trago

To his niece Sarah Griffith