This letter was written by Sgt. Edmond W. Eakin (1835-1906) of Co. D, 125th Illinois Infantry. Edmond enlisted on 3 September 1862. At the time of enlistment he was described as standing 5’8″ tall, with dark hair and black eyes. He gave his birthplace as Wythe county, Virginia and his residence as Dallas, Vermillion county, Illinois. Edmond was married to Ellen Maria Fairbanks (1837-Aft1900).

Edmond remained with his regiment until he was seriously wounded at Kennesaw Mountain while on Sherman’s March to the Sea.

Edmond the wrote the letter to Richard Lockett, presumably the father of John W. Lockett of Georgetown, Illinois, who served with Edmond in Co. D.

It has been almost 5 months since I left home and during all of that time I have failed to write you a single line. I hope you will accept this letter as an apology for my past negligence. My health was very good until a few days after we left Louisville in pursuit of Bragg. But while on that march I was taken very sick. First with something like cholera morbus, which soon terminated in bloody dysentery and the surgeon decided I must be left behind my regiment so I was left at Bardstown, Kentucky, on the 5th day of October under very unfavorable circumstances. Bragg had just been driven out the day before by our advance. He had been there for about two weeks with about 60 thousand men who were starving and destitute when they came there and they had literally cleaned the town and surrounding country of everything that would supply the wants of his soldiers.

I was left in a hospital where there was nothing  to relieve my wants unless it was Secesh soldiers and lice broth of which there was a bountiful supply. The Secesh soldiers were very sick but the lice appeared to enjoy good health. I lay on the floor for some days with nothing but my blanket for a bed and covering. Medicine there was none in the town. Our surgeons took their supplies on with the army and there was none to be procured nearer than Louisville and it was the same way with provisions so that all of the sick soldiers who were left at that place had hard times for about 10 or 12 days.

During that time, however, nature was very kind to me and my health was very much improved—so much so that I could get out and walk round some. In a few days after the Battle of Chaplin Hills, sick and wounded soldiers were sent back to Bardstown in great numbers and it became necessary to establish several hospitals and I was detailed as Hospital Steward and remained there 70 days on extra duty. Part of that time I had chills and fever but was not seriously sick at any time. We soon received supplies from Louisville and from that time on had everything that was necessary to make the sick & wounded comfortable. I remained there until the 23rd day of December when I procured my discharge from the hospital and started to join my regiment which I found at Nashville on Christmas Day which, by the way, was a very pleasant Christmas to me. I was truly glad to see my comrades once more after an absence of more than two months.

My health for some time past has been very good. I suppose I would weigh more than I ever did. John Lockett’s health is improving very much. For a short time after I got here, I was somewhat uneasy about him. He had taken cold after having the measles. But he is now improving very much, He is in good spirits and I have no doubt but he will soon be as well as ever. Besides this, John is very moral and steady in all of his habits. I never have heard him use an improper word nor seen an improper action. This I consider very commendable in one of his years.

The health of our company is quite good at this time. There is not more than one dangerous case. Eugenas [Eugenius] Loveall is quite sick and we have had fears that he would not recover. The Doctor thinks he is better and that he will get well. ¹

I suppose you are having some warm political discussions up in your country if we get a correct account of affairs down here in Dixie. I determined when I entered the army to discard politics—to know no man as a Republican or a Democrat, but to do my duty as a soldier in my humble capacity, trusting to the intelligence, honesty, and patriotism of those whom we left behind to sustain us through all the trials and hardships of this terrible war. But I must confess that if all we hear is correct about the action of certain leading politicians who are opposed to the policy of the President and his administration, we have greater reason to fear those we trusted for support than we have the rebels. It is true that the President is but mortal and may have erred. It is also true that many good men and patriots doubt whether his Proclamation for the freedom of the slaves in the rebellious states is well calculated to accomplish the desired end—the final restoration of the Union, or not. But be this as it may, there is one thing evident; that those at the North who desire this result should not fall out among themselves and fight about the Policy for this will secure our ultimate and final defeat. This proposition so plain, “that the wayfaring man though a fool… [rest of letter is missing] 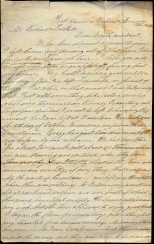 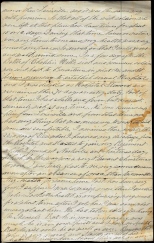