Eli Walter Osborn (1835-1865) enlisted in the New Haven Grays when he was just 20 years old.  Eli moved up the ranks quickly and earned the title of Sergeant in 1857 and First Lieutenant in 1858.  He became a Captain in 1859 when he was only 24 years old. In 1861 the New Haven Grays were called to enlist for 90 days.  They were engaged in the Battle of Bull Run as well as many other battle engagements that took place in Gettysburg at that time.  While he was a Captain in the 2nd CT Infantry Company G, part of the New Haven Grays, he wrote a letter on July 27, 1861 to his brother about how his men, “stood fire like bricks it was a hard matter to keep them back…”   In that letter he recounted his men’s bravery and conviction. In 1862 Eli Walter Osborn accepted the post of Major in the 15th Connecticut Volunteers where he fought with his men in the Battle of Fredericksburg, one of the most significant battles of the war.  In the ebook, The Military and Civil History of Connecticut During the War of 1861-65, Eli is described as unselfish with a generous temperament, a man who had the confidence of his comrades. Eli Walter Osborn was wounded and captured in Kinston, North Carolina on March 8, 1865. Osborn died on April 6, 1865 of blood poisoning while a Prisoner of War in Danville, Virginia.

As I have written to father and George, I shall further continue my writing by addressing a few lines to you. I have this day received a letter from Sophia, brought on by Captain White who arrived this afternoon from Fortress Monroe.

She informs me that you have been sick with the rheumatism of which I am sorry to hear. I hope it will not continue to trouble you as it almost as bad, as being without some of your limbs. The only wonder to me is that we do not have more of it in the army. You must take care of it, and not let it get the upper hands of you. She also speaks of “Henry.” I think I can see the little scamp looking at the pictures with you turning over the leaves.

We are very pleasantly located here at Newport News, being in log barracks. The day we arrived here was a splendid day, as was also the following one. Since then we have had rather unpleasant weather though unaccompanied by the Falmouth mud, for the absence of which we are truly thankful. It is impossible to tell how long we shall remain here, though we think it will be about two weeks as it is will take about that time to organize the corps, and as yet they are not all here.

I have been in hopes that I could have a chance to come home for ten days but I have given it up for the present. You may make up your mind that when I do have an opportunity, I shall improve it, and so make my appearance suddenly some fine day.

We are of the impression that we are bound for North Carolina under Burnside but of course we can tell nothing about it. We should be pleased to go there at all events, and the men are delighted at the idea. Oh! you cannot imagine how cheerful the men are here, to what they were while mud bound at Falmouth. The difference is so great. From deep sticky mud to clean white beach sand.

The post master is in my house waiting for the mail, and I must close. So good night.

Remember me to all, your affectionate brother, — Walter 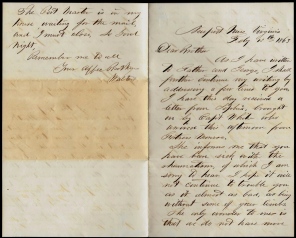