This partial letter was written by an unidentified Union infantryman who datelined it from “Camp No. 5, Princeton, Virginia” on 5 May 1862. No names of comrades, officers or unit designations are contained within the letter; neither is there an envelope to tell us the recipient’s identity. Curiously, an internet search of “Camp 5, Princeton, Virginia” brings us to the Civil War letters of Rutherford B. Hayes who datelined many of his letters with that same heading in early May 1865. Hayes was commissioned a Major in the 23rd Ohio Volunteer Infantry (OVI) and participated in Rosecrans’s offensive into western Virginia in 1861. In the spring of 1862, Hayes led his regiment into southwest Virginia where he was slightly wounded on 10 May 1862.

Backtracking the movements of the 23rd OVI through Hayes’ letters we learn that they were encamped near Raleigh, Virginia, in mid April 1862. On 22 April, Hayes wrote a relative that he had an independent command of the 23rd OVI and was advancing with Fremont’s column in a southerly direction. On April 25th, he wrote that he was “sending four companies (A, E, G, and H) to the junction of New River and Bluestone to ‘bag’ a party of 120 rebels supposed to be there.” On Sunday, April 27th, Hayes wrote that he had moved his regiment to Shady Spring. These events are consistent with the content of the letter, leading me to conclude that its author was a member of either Co. A, E, G, or H in the 23rd OVI under the command of Major Rutherford B. Hayes.

This letter was written just days before the Battle of Princeton Court House which occurred on 15-17 May 1862 in Mercer county, Virginia (now West Virginia).

I received yours of the 18th of April about a week ago but was so busy marching that I had not time for to write to you. Since I wrote to you we have been on a scout about 25 miles from Raleigh [Virginia]. We started at 12 o’clock p. m. and marched till daylight when we stopped and got some coffee and then started again and marched to Jumping Branch, and from there to the mouth of Blue Stone River. We expected to have a skirmish there but we saw none of them. Our company stopped there all that night and on the following day marched back to camp—the distance about 24 miles. The regiment had marched to Shady Springs. We stopped there 3 days and the regiment started on the march. We marched to the top of Flat Top Mountain and stopped there till the next morning.

But before I go any farther with this I will have to tell you of the skirmish Co. C of our regiment had. They started from Shady Springs the night before we did. They were in the advance of us and when we stopped at Flat Top, they were 4 miles in the advance of us. They were stopping at a house [on Camp Creek] that was deserted. During the night, about 200 bush whackers surrounded the house and about 4 o’clock in the morning they were attacked and the rebels would yell out every little while [for them to] surrender but the boys said, “Not to you.” There was 1 killed and 21 wounded out of Co. C and there was 1 died since. There was only 70 of our boys all together [in Co. C]. ¹

We started from Flat Top about 6 o’clock in the morning and got to where Co. C was about 7 o’clock. As soon as we got there, our company was deployed out through the woods and the first platoon had not gone far when we met some fellows in the woods. They were about 600 yards from us on the top of a hill, and they asked us where Capt. Bowen was (he was the secesh captain that attacked Co. V) and we told them that he was behind us and for them to rally on us. Just then one of them saw our wagon coming around the bend of the road and one of them asked whose they were and another said that they were the Yankees and then they broke for the woods and our boys fired on them. Thy thought that we were secesh.

And then we were on the march again and we had not gone over 4 miles when we came to a house and there was 5 secesh ran out of a house and they all got away but one and he had 3 shots put [into] him while he was running. And in that house there was 1 man that had his face shot off him by Co. C [earlier] in the morning. We carried the man that was in the house and then proceeded on our way but we had not gone over 2 miles when we were fired into by about 100 men. But before we could get on top of the hill where they shot from, they were not there. But we followed them up a ways and we took one prisoner. We then came down off the hill onto the road and proceeded on the march. The next house we came to there were 3 wounded men—“Secesh.”

¹ From Major Rutherford B. Hayes’ letters we learn that Co. C. was attacked near Camp Creek “by Lieutenant-Colonel Fitzhugh with four companies, dismounted, Jenkins’ Cavalry and Foley’s bushwhackers.” The author’s here-say version varies of the attack on Co. C varies somewhat from Hayes’ account but it no doubt the same event. Hayes wrote that his men were surrounded “by three hundred Secesh” who took shelter in the log house where they were quartered. Hayes called it a “splendid victory” for Lt. Botsford and Sgt. Ritter of Co. C and Sgt. Abbott of Co. I.  Major Hayes added that he arrived on the scene not long after the rebels had fled. 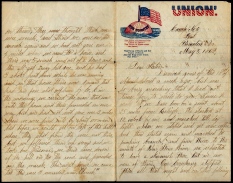 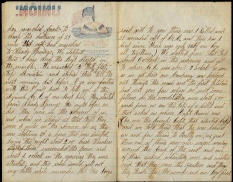