A very complete biographical sketch of Abraham can be found in Private Abraham N. Wolf—Millwright and “Inventive Genius” on the 47th Pennsylvania Volunteers website.

Today is Sunday and the band is playing a hymn and the preacher is a preaching now. We have preaching here every Sunday. And news—I ain’t got any for the army is lying still here now and so there ain’t anything new here.

¹ Camp Griffin was located around a hill west of the Chain Bridge less than two miles from the village of Lewinsville, Virginia. 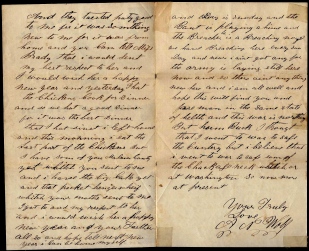