This letter was written by Byron March (1843-1864), the son of Peter and Nancy March of Avoca, Steuben county, New York. Byron enlisted for three years in Co. K, 104th New York State Volunteers in November 1861. In March 1862, he was transferred to Co. E.  He re-enlisted as a veteran in January 1864 but died at Avoca on 29 February 1864 of a disease acquired while a prisoner of war at Belle Island in Richmond, Virginia. He had been taken prisoner at the Battle of Gettysburg in July 1863.

Yesterday I received a letter from Mother stating that she was at Starts [?] taking care of Aunt Maria who is very low. I have sent fifty dollars $50 by Express to Avoca now mother is so far from and may not come in a month. I believe if the money lays in the Express Office over 30 days it will be sent back to me again and then I will have to pay one dollar extra for to have it expressed. I suppose you have received my letter to mother and sent it to her. If not, I want you to send it right on to her. I want you to write to Mother and tell her if she thinks that she will stay there long, to send an order with her own signature to someone who she thinks will keep it safe for her—say Uncle Abe Backer for instance—then he can go to the Express Office and draw the money. Now Alice, you must write right off to mother and write to me and tell me if you received that other letter that I sent to mother or not.

We are encamped at the same place as we were when I wrote my other [letter]. My health is middling good. I think that we will go on towards Richmond before long—at least I hope so for maybe I will have a chance to see one of the greatest battles fought that is on record. If Richmond is taken without a heavy loss on our side, I think that I will be home about New Years.

The evacuation of Corinth was a heavy blow for the Rebels. It is worth more than 2 hard fought battles for there is no loss whatever on our side.

I have no time to write anymore for it is mail time. So write right off. If you [see] Uncle Abe, tell him to go over and see Chase about that money and to see if it’s there. Then when you write, let me [know] of it.

From your brother, — Byron 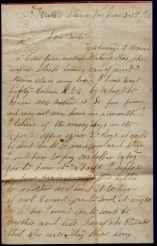