This letter was written by Elisha Rose (1843-1863), the son of Thomas and Priscilla Ann (Caskins) Rose of Alfred, Allegany county, New York. Elisha enlisted at the age of 19 as a private in Co. H, 130th New York Infantry on 15 August 1862 to serve three years.  When mustered, he was described as a mechanic and a painter by trade, standing 5 feet 7 inches tall, with brown hair, black eyes, and a dark complexion. The 130th New York Infantry was converted on 28 July 1863 into a regiment of cavalry. They were first called the 19th New York Cavalry and re-designated the 1st New York Dragoons prior to his death from disease on 1 November 1863 at Alexandria, Va.

After it was mustered into the service, the 130th New York Infantry was pushed at once to the Union front, south of the James river, at Suffolk, Va., where from mid September 1862 until January 29th, 1863, the men were occupied with the “usual duties of the soldier in an advanced garrisoned position in the South—picket duty, throwing up entrenchments, building corduroy roads, burying the victims of malaria, turning out at midnight for long roll alarm, usually without cause, but occasionally relieved by a reconnaissance to the Black water, without other result than blistered feet and swollen limbs.” 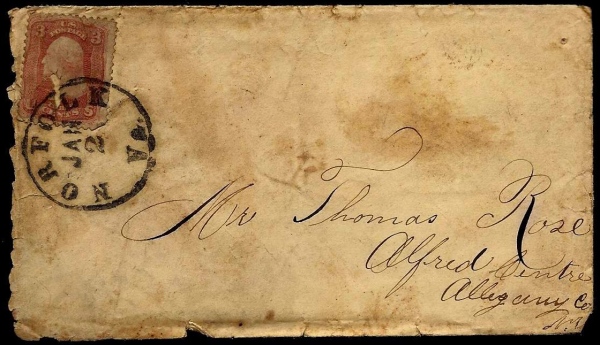 I am well all except one thing and that is I have been sick a little while with my arm. I was vaccinated and it is a working and it makes me sick. The doctor has excused me from duty a few days till it gets better. My arm is swelled pretty bad.

Today is the first day of January 1863. It is a very pleasant and warm day here. The boys are very musical here today—all a trying to enjoy New Years the best they can. The officers appear to enjoy themselves the best though.

I haven’t been in any skirmish yet but have been in sight of the rebs a number of times. They come up in sight of the pickets every day. We went off on a scout the other day and we hadn’t got far before the rebel pickets shot at us. We catched one right there on the spot and chased the rest about 8 miles and then catched 6 more. One was a reb captain, He was a very tall and big man. We went 10 miles and stopped a spell and a dispatch came from General [John J.] Peck for us to return back. How mad our old general [Alfred Gibbs] was. We would [have] took a lot more of them if he would [have] let us went on. ¹

All the force we had was 3 regiments of infantry, 4 pieces of artillery, and 4 companies of cavalry. The rebs force they said was about 5 thousand so the ones said that we took prisoners. Old General [Alfred] Gibbs said that all that he had to rely upon was the 130 Regiment. He knew them boys. He was our colonel on the start or when we first come here. The other 2 regiments was green troops. They was Pennsylvania drafted men. The old general said if he hadn’t got orders to come back, that he would went through and took Petersburg. He would let folks see what the 130 [New York] Regiment could do and I guess that he would, He is a good general. They rebs says that they are a going to take this place [in] less than a month. We would like to see them do it. When they come, we will hear our old forts talk that we have built since we have been here.

We are having as nice weather here as ever you have there in the summer. What a country this would be here if they would set our old farmers in here and let them work it as they do to their land there. The white men don’t work here. The nigger has done all of the farming and they don’t care how they have done it and the land looks so that it never has been half tilled. They are some of the prettiest plantations here that ever I see in any country. It is just like the show land if it was worked as good as that.

I have been here so long now that it seems like home to me now. The first of January has come now and it will soon tell how much longer we have got to stay here. Some thinks this war is a going to close soon and some think it won’t. I haven’t seen a sick day yet—only the vaccination of my arm. There is a good deal of sickness in the regiment now. They has been over forty sick in our regiment since we have been here. I have been lucky so far and I am in hopes I shall be as far as sickness is concerned.

We was mustered out for pay yesterday but no knowing when we will get it. Maybe we won’t get it in five or six months to come yet. We can’t tell and I am out of money and if you are a mind to send me some more, it would come good. I reckoned that we would get our pay and I wouldn’t want any more sent but we haven’t so if you are a mind to, send me some. I will be a thousand times obliged. I haven’t spent a bit of money foolishly since I have been here as you use to tell me some time. The most I buy is a dish of oysters once in a while. When we do get our pay, we will get quite a pile. I have been mustered now for $52 and if it runs two months longer, it will be $78 then. It is a growing more and more all of the time.

I haven’t been homesick any yet but I would like to see Floria and all the rest of you but I can get along. A fellow cannot get lonesome here. There is too much going on here all of the time for a fellow to get homesick or lonesome.

They has two regiments left here—Wessell’s and Spinola’s. They have both gone down into North Carolina and they has one more brigade come in—the Irish Brigade. Corcoran is the commander of it. I think he will take command of this army at Suffolk. Gen. Peck doesn’t do anything. I think we will stay here in Suffolk this winter. ² We had orders once a few days ago to go down into North Carolina but the orders was countermanded and we are a going to stay here I think now. Mr. [Ira] Sayles makes a good Captain. He uses his boys the best he knows how. I like him first rate. He don’t make a very good drill master though. ³

I am a getting my paper pretty well used up and I must fetch to a close. Write soon. Give my respects to all enquiring friends. This is from your son, — Elisha Rose

To my father and mother, Thomas & Ann Rose

¹ Levi D. Green of Co. E, 130th New York Infantry, wrote his parents on 31 December 1862 that, “We have had another trip to Blackwater….One of our cavalrymen was wounded in the leg, In one house there was two wounded men—one was a Rebel, one was Union. We took 15 or 20 prisoners. Among them was a Rebel Captain. He was a big overgrown, strapping fellow. He was dressed in the butternut brown so common in secession. We did not get any of our regiment hurt and came into camp rejoicing but we should have liked it a great deal better if we could have fired about 40 rounds at them.

² The camp of the 130th New York Regiment was originally located on the Edenton road east of Suffolk near the Great Dismal Swamp. This camp proved to be too unhealthy and early in December 1862 the camp was relocated to 1 mile west of Suffolk near the South Quay Bridge over the Nansemond river. 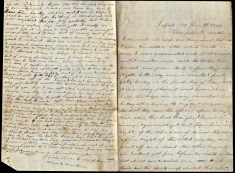 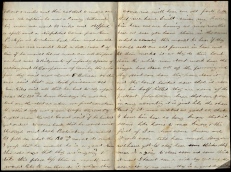