These three letters were written by Pvt. Samuel Wiley Myers (1845-1884) of Co. F, 49th Illinois Volunteers. According to the Illinois Veterans Index, Samuel entered the service at age 19 as a recruit to the regiment on 12 March 1864, enlisting for three years. He stood 5 feet 8 inches tall, had light hair, blue eyes, and a fair complexion. At the time of his enlistment, he gave his occupation as “farmer” which is consistent with the 1860 US Census where he was enumerated in the household of his father, a Kentucky-born farmer in Marion county, Illinois. He mustered out of the regiment on 9 September 1865.

It is with pleasure that I take my pen in hand to let you know how I am. I am in good health and hope when this comes to hand, [it] may find you all in good health. Well, we are looking for the boys up now every hour and if they don’t come up this week, I guess we will start to Vicksburg next week and I guess we will find the boys there. I would like to see the boys now the next kind.

Well you sent me a pink now I will send you a rose. I am glad the wheat is looking so nice. The peas down here is all gone. We had peas in a day or two after I got here. Well we have prayer meetings here at the Soldiers Home every morning and evening.

Tell Sarah Ann to write. I have been down to the river today. Well I guess I had better stop for I have nothing much to write. I want you to tell me in your next letter whether the 111th Regiment is at Richmond or not and tell whether they brought William Stover home or not.

So I will quit for this time. Don’t forget them stamps. So no more but write soon and often. Your son, — S. W. Myers

to John Myers and Family.

Oh yes, tell me where Till Fowler is at. 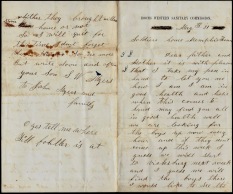 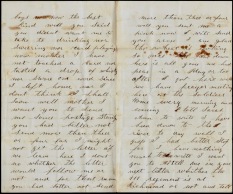 [Note: This letter refers to the Second Battle of Memphis which took place on 21 August 1864. Gen. Nathan Bedford Forrest led 2000 troopers into Memphis in a pre-dawn raid looking to capture some Union Generals and to release some Confederate prisoners.]

It is with pleasure that I take my pen in hand to let you know how I am. I am well at present and hope when these few lines comes to hand, [they] may find you the same. Well, Mother, I sent some little books. Let Martha take the little Black Book in the envelope that’s got her name on it and give Will the Roll Call and prayer, and you keep the other one yourself. And Mother, I want you to send me as nice a present as I sent you, I want you to send me 2 pairs of socks and 2 hand towels and you may send me one or two handkerchiefs if you are a mind to, and something to eat, if you have a mind to.

Well, I will tell you of the times. The rebels made an attack on Memphis last Sunday morning and killed a great many of our boys and wounded about one hundred. Well, I guess I will stop. So no more.

From S. W. Myers
To his Father and Mother

Well Martha, I will answer your letters after so long a time. You wanted to know how I done about my washing—whether I done it myself or not. I sometimes do it myself and sometimes hire it. Well Martha, I sent you a nice little book and I want you to send me as nice a present as I sent you. I want a fine comb. Send me some post stamps in the next letter. Well, I will stop.

Well I will write a few lines to William, Well, Will, does Pap make you plow or not? The other day when the rebels come in here, we made them get up in the dust and travel.

Direct your letter to Fort Pickering, Tenn. Leave the Co. and Regt. off. Just direct to:

Well, Will, I guess I had better stop. Write soon. From W. W. Myers to William J. Myers

[Note: This is one of the few letters I’ve found from a soldier participating in the series of skirmishes and battles occurring in Missouri that came to be known as “Price’s Raid“—a late war attempt by the Confederacy to replenish the ranks of its dwindling army with recruits from Missouri and at the same time restore a pro-slavery government in the state. The Confederate raid was led by 55 year-old Maj. Gen. Sterling Price who was known to Union and Confederate soldiers alike as “Old Pap.” The raid failed to accomplish its objectives and received a death blow at the Battle of Westport near Kansas City on 23 October 1864.]

It is with pleasure that I take my pen in hand to let you know that I am well at present and hope when these few lines comes to hand, may find you the same. Well, we have been on a hard march for the last week and we all stood it first rate except our feet. My feet got so sore that I could hardly walk and I guess we will start out in the morning again after Old Pap Price. He has been a cutting round here through Missouri and we are going to see if we can’t stop him. They say he is out at Boonville. That is about 25 twenty-five miles from here. We marched from St. Louis to Jefferson City and then we got on the cars and came out here to California and we will march through to Boonville. It is very hard marching through Missouri over the hills and rocks.

Well, you must excuse my bad writing and spelling for you know that I am tired after a long march. Well, I got a letter from Atlanta, Georgia. It was from William Snider ¹ and he said he was well. It was dated September the 22nd and I got it the 30th. It came through from Atlanta in eight days and Will said the Old Stars and Stripes waved over Atlanta. I wrote a letter and started it to him as soon as I got his. I guess he has got it by this time if it went straight through as his letter came to me.

Well, I want to know what has become of John and Bill Shelton ² and Arthur Leonard. ³ They have stayed about a month over their time and I think it is about time for them to be a driving up. Well, I guess I will stop for this time for I have nothing much of importance to write. So no more at present. But write soon.

To John Myers and family

¹ This was William R. Snider (B. 1838) who served as a corporal in Co. G, 111th Illinois Infantry. He entered the service in August 1862 at Centralia, Illinois. The 111th Illinois Infantry participated in the battles before Atlanta and then after Hood’s army evacuated the city, they were part of the occupation force until November 1864.

² John W. Shelton and William V. Shelton were both recruited to Co. F, 49th Illinois from Centralia in 1864; John in April and William in July. They both mustered out of the regimen on 9 September 1865. 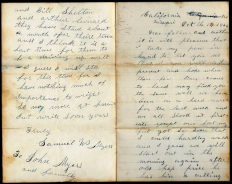