This fascinating letter was written from Washington D. C. by someone signing their name “Jno.” and addressed to his “sister Mary”—otherwise unidentified. After thoroughly examining in the content of the letter for clues, I feel confident in attributing this letter to John H. Stevens (1839-1919), the son of Andrew S. Stevens (1791-1871) and Sophronia Harding (1799-1856) of Knowlesville, Orleans county, New York. John married Alice (“Alllie”) A. Andrews (1844-1875)—-who is mentioned in this letter—about 1867.

John enlisted as a corporal on 22 October 1862 to serve three years in Co. A, 151st New York Infantry. This company was unique in that its members purchased their own Sharp’s rifles for $40 apiece when they entered the service. John was wounded severely in the thigh in the fighting at Mine Run in December 1863 and sent home afterwards to recover from his wound. On 30 September 1864, with the rank of sergeant, he was transferred to the 95th Battalion Veteran Reserve Corps (Co. 2) and detailed as a clerk in the Provost Marshal’s Office at Washington D. C. He was officially discharged on 11 May 1865 at Washington D. C. According to the Muster Roll Abstracts, John was a farmer from Ridgeway, New York, who was described as having grey eyes, black hair, a light complexion, and standing 5 feet 11 inches tall [note: the members of Co. A, 151st New York were distinguished for their above-average height; the average was 5’9″].

The letter is fascinating because it includes references to many of the events occurring in the Nation’s Capitol at that time. He mentions the rumor of CSA Vice President Alexander  Stephens peace mission, the devastating fire at the Smithsonian Institute, the murder of a Treasury Department clerk by a spurned woman, and provides a first-hand account of the 3rd Annual Christian Commission Meeting held in the US House of Representatives Hall in which President Abraham Lincoln attended.

As my cold and headache are nicely over with, I will now answer your good letter of the 22d ult.

To begin with, I will inform you that Theo[dore F.] Brown and Dyer [B.] Gillett ¹ are with us; their [23rd] Corps came here from the West last Wednesday [25 January 1865] and is now stopping in the city to recruit up a little. The boys hunted the city all over trying to find us and with poor success as they did not know the number of the house where we live or in what offices we were in. But Sunday evening [29 January 1865] at a meeting of the Christian Commission, I spied a soldier who looked very much like Theo. so after we had scrutinized each other very closely, I left my seat & went over and asked him who he was. I was very much surprised when I found out it was he for I had not thought of his being in this part of the country. He came home with us & stayed over night and the next day brought Dyer over so we have had some very good times. I guess their corps is going down to join Sherman. The boys are looking well and are feeling first rate.

That meeting, “by the by,” was held at the Capitol and there was a large crowd there, I can assure you. It was the annual meeting of the Christian Commission and we heard some good speeches from a number of our noted men. The President & Vice President, Admiral Farragut, and a number of the Senators were there. Farragut was called upon to speak but he wished to be excused. The most of the men that spoke would have a story to tell or something would remind them of a joke—which is Uncle Abe’s expression. The President remarked after a General had been telling a good story, “that one beats any of mine.” They had some splendid singing there ² and the meeting did not close until about 12 o’clock.

There has been considerable excitement in the city for a day or two caused by a tragedy which was played at the Treasury Department. Perhaps you have seen an account in the papers of one of the clerks [Burrows] being shot by a woman [named Mary Harris]. She came from Chicago for the purpose of shooting him as he had broken his engagement with her & had married another woman. She probably had a just cause for shooting him and I don’t think she will have to suffer the penalty of death upon the gallows.

Since I last wrote you, we have had a fire here [24 January 1865] which did considerable damage. It was the Smithsonian Institution which caught fire and it was nearly destroyed before the flames could be extinguished. The burning of that building was a great loss to the government as it contained curiosities which were sent here from all parts of the world. It also contained a great many old relics and animals & birds of every description. The building was a very fine one and there was no place so attractive to the many visitors who are constantly thronging the city as that was. It will probably be rebuilt but a great many of the things which were destroyed can never be replaced.

Yesterday [31 January 1865] there was a salute fired over the good news from the House of Representatives which was the decision in favor of abolishing slavery. The bill has to pass the States yet and may not go through after all but we will hope for the best.

It is reported that Vice President [Alexander] Stephens of the Southern Confederacy is here negotiating terms of peace but I cannot believe it until I see him. I should think the Rebs would begin to feel like coming to terms on our conditions for they are losing ground now very fast and they must know their cause is hopeless. They are like a great many girls or young ladies whom we know—see they are wrong but too proud to acknowledge they are in fault. What great rejoicing there would be if it was made known that Alexander Stephens had come here to accept of the terms which Abraham Lincoln considers to be right. I am willing to let Uncle Able decide upon what we shall give them and what we shall not.

It has been quite cold here for a week or so but I suppose the weather is nothing like what it is at K[nowles]ville [Orleans county, New York]. We have had no snow to make sleighing but the wheeling has been splendid. I understand it is fine sleighing at home and I would like very much to be there a short time to enjoy a ride or two. I hope you will have an opportunity to take a number before spring.

I received a letter from Allie Andrews yesterday. She writes that a dancing school is under contemplation to be held at the Brick Hotel. I don’t think they will succeed very well as the young people there disapprove of such amusements. I thought I wrote you some time ago that I had received a letter from Miss Lucy and that she did not request me to write again. You know I don’t like writing letters well enough to correspond with a young lady unless she wishes me to. I like the name Miss Flora very much and I believe if I should happen out in that part of the country, I should do all in my power to captivate the charming creature. George ³ & I are both very sorry the beaux are so plenty in that region and we think our chances are very slim, but I know that are worth striving hard for and if we should happen to come off successful, our triumph would be all the more complete. If it is not too much trouble, just give them our best respects.

Those stockings were very nice but rather large. I am wearing my woolen shirt now so that I will save my white ones considerable. It is now time for me to retire so I will close.

² The Third Annual Meeting of the U. S. Christian Commission was held in the Hall of the House of Representatives at 7 P. M. on 29 January 1865. The Washington Handel and Haydn Society performed at this event, “opening the program with Bellini’s ‘Mighty Jehovah.’ After singing a couple of patriotic songs—with audience participation in at least one—they performed Handel’s ‘Hallelujah,’ from Messiah, and concluded with the Doxology.” Included as item 7 in the order of exercises was the song, “Your Mission” by Philip Phillips of Cincinnati which appealed to President Lincoln that he asked for a reprise in the final hour of the event.

³ Possibly George B. Dikeman (1843-1908) who was from Ridgeway, Orleans county, New York. George served with John H. Stevens in Co. A, 151st New York Volunteers. He was also discharged in Washington D. C. in May 1865 at the same time as John. There is also a possibility that it was George Bragg who also served in Co. A, 151st New York Volunteers. Bragg was transferred into the 81st (co. A) Veteran Reserve Corps in Washington D. C. 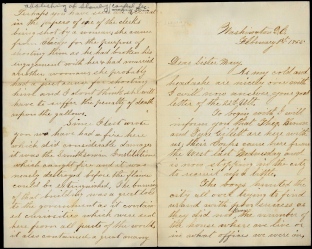