I once more take the opportunity of writing you a few lines to let you know where I am and how I am getting along down in the land of cotton and Rebels. Well, in the first place, my health is good at present with the exception of the Spring Fever which seems to be very prevalent just now among the soldiers. We have been at this place a couple of days but I expect that we will move on soon toward Atlanta. We are now thirty-three miles from there and one hundred and five from Chattanooga so you see that we have gained some ground since this campaign commenced and expect to gain more before it is through with.

Our regiment has been fortunate so far. I don’t know how it has happened though as they have been on the front line all the time since they started out this time. We have lost one man killed and six or seven wounded in the regiment since we left Rossville but their time may come yet but I hope they will get through all right yet.

I was over to the 46th O. V. V. I. yesterday. They are only a short distance from us but there was only a few boys left that I knew. Lute Morton and Henry Rhodes were both wounded on this campaign and I expect are at home now.

I saw John Cooper and Sol Henderlick of the 27th O. V. V. I. the other day. They were both well. They spoke of having a good time in Reynoldsburg while they were at home. I should like to of been there about that time but my time will come some of these days if nothing happens.

The weather is extremely warm down here. Yes, you can say hot. Wheat is almost ready to cut and other things are advanced in proportion. I saw some ripe blackberries the other day. They looked like old times to me.

Tell Mr. Mason’s family that Nat is all right yet. He said he wrote a letter home yesterday I believe it was.

I wrote a letter to Han a few days ago. I told her to tell you to send me a dollars worth of postage stamps as I can’t get any down here. I sent her letter without paying for it. I got a young man that was going north to put it in the post office some place along the road as he went up. Did my overcoat ever get home that I expressed to Will Thompson? I have never heard whether it did or not. The express charges were not paid on it as they would not take pay at this end of the road.

We have not been paid off this year yet and there is no telling when we will be now. Han said that you sent me a letter by someone coming. Who was it? I have not received it yet. Well, I must close for the present. Give my love to all the friends and write as often as you can. I will write soon again. We can’t get the letters off only once in a long while. We have only got one mail in two weeks. Write soon. From your affectionate son, — W. H. Holliday 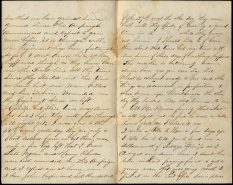