Regrettably I have not yet been able to learn the identity of the soldier who penned the following letter to his “dear and beloved wife” from Nashville, Tennessee, in December 1862. From the content of the letter, I have deduced that the soldier came from DeKalb county, Indiana, and was a member of one of the Indiana Infantry regiments. Looking at the Indiana regiments that had one or more companies with several members of volunteers from DeKalb county and that had served greater than six months—and then further winnowing them down to only those who were encamped in or near Nashville in the month preceding this letter dated 1 December 1862, I have concluded with some confidence that the soldier served in the 30th Indiana Infantry—mostly likely Co. H though Companies D, E, F, and G are also possibilities. If I could find the ages of the volunteers from DeKalb county who served in these companies, I believe I could further narrow the possible authors down to a very small list as I suspect the author was born before 1830. Unfortunately, I’d have to go through the entire roster of these companies to search Ancestry.com for personal information and this would take too much time. [Note: The History of DeKalb County, Indiana by B. F. Bowen (1914) contains the names of all the soldiers from DeKalb Co. who served in the 30th Indiana Volunteers on pages 102-103.]

The 30th Indiana had the dubious honor of suffering the most killed and mortally wounded members of all the Indiana regiments during the Civil War. They lost 26 at Shiloh, 46 at Stone’s River, 22 at Chickamauga, 3 at Rocky Face Ridge, 5 at Resaca, 6 at Dallas, Ga., 16 at Kennesaw Mountain, 6 at Atlanta, 1 at Franklin, 3 at Nashville, and 3 others elsewhere.

It is with the greatest of pleasure that I again take my pen in hand to pen a few lines to you to inform you that I am quite well at this time and sincerely hope those few lines will find you and our loved ones all well and enjoying good health. I received a letter from you day before yesterday and was glad to hear from you again and to learn that you were all well, It is a pleasure to me to get a letter from you. Yesterday I got one from John. The one I got from you had an envelope in it with a stamp on it. I was looking over those envelopes that you sent me today and happily surprised to find nine of them had stamps on. I am very much obliged to you for them, Them verses you sent with that braid of hair is very nice and very true.

I went yesterday to visit the 44th Indiana Regiment. That is the regiment that Alex[exander] Kinmont ¹ is in and I spent a pleasant day with him. They have got a better company & officers than we have. Alex cooks for the officers and I eat dinner with them.  He baked a nice short cake and they had fresh mutton and butter and preserves that was sent from home. John Gunsenhouser is in command of the company and Nute Thomas is a lieutenant. ² They did not act like our officers. Net Mullenix is in that company. Nute Thomas was home recruiting for their company and he enlisted with him at Norristown. I saw him and he looks well and I think he will make a good soldier.

You said your wood that I chopped was all burned up and I must come over and chop some. Nothing would give me more pleasure than to be able to do so but I am a slave to the government. I think if I live to get out of this scrape, they will never get me in again in the Union all goes by the board. I am constantly in a worry about you for the want of wood and other things. Oh that I could be with you again as I use to do and enjoy your society. Then I could take comfort.

We are still at Nashville. I think we will get our pay about Wednesday. They have made out the pay roll and I think we will sign it tomorrow and get our pay the next day. They are going to pay us for only three months and they owe us six today and then I have over fifty dollars owing to me besides. Tell me if you don’t think I have done pretty well. I have made up my trip home and more too and I think that is doing very well. I will send the money to you by express as soon as I get it.

The boys are all well. They are a settling up the clothing list for the year and the allowance is 42 dollars. I have taken up $37.22 so you see there will be some coming to me on that.

I stopped writing to read a letter from you and to learn that you are all well but sorry to hear of your persecution from my own relatives. They need not try to set up against you for they can’t do it. I love you too dearly to ever forsake you, I know you live as saving as you can. You told her right. What is mine is yours and it is none of her business what you buy. Make yourself comfortable with the money that I send you. It is yours and you use it as you please. I will write her a letter and give her a piece of my mind.

Don’t pay out your money to close. Keep enough to buy all that you want and oblige me.

¹ Alexander Kinmont (1827-1920) of Hixville was a corporal when he enlisted in Co. F, 44th Indiana Infantry. He was later promoted to 1st Lieutenant of Co. F.  From Find-A-Grave: “Kinmont entered the service on September 23, 1861, as 1st Corporal in Company F, three days after his brother, Thomas, entered as 2nd Lieutenant. Alex was promoted 4th Sergeant March 20, 1862 He fought in all the battles receiving honorable mention by Colonel Reed at Fort Donelson and Shiloh where he was twice wounded on Sunday but was in Monday’s fight. He was sent to Evansville, Indiana, and returned to the regiment Aug. 10, 1862. After fighting at Chickamauga, he reenlisted as a veteran and married Barbara Peterson March 6, 1864, in DeKalb County, Indiana, while home on veteran furlough. He was promoted 1st Lieutenant on June 3, 1864, became Quartermaster on January 17, 1865 and mustered out with the regiment on September 14, 1865. Kinmont was a farmer in DeKalb and Steuben County, Indiana, but he died Feb. 19, 1920, at his son Bruce’s home in Albion, Calhoun County, Michigan, and is buried in Riverside Cemetery there.”

² John Gunsenhouser of Jarvis served in Co. F, 44th Indiana Infantry. He rose from the rank of sergeant to Captain of Co. F before he was killed at Chickamauga on 20 September 1863. He was succeeded as captain by 1st Lt. Irving Newton (“Nute”) Thomas of Newville. 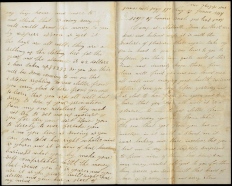 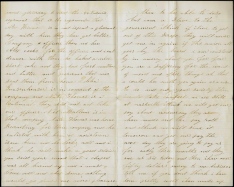