This letter was written by Pvt. Robert Isbell, Jr. (1820-1863) who served in Co. D,  2nd South Carolina Rifles and later during the war with the Palmetto Sharpshooters. Robert was 41 years-old when he enlisted in November 1861 after the death of his wife, Lucinda E. I. Wright (1825-1861) who bore him at least eleven children. Robert was admitted to General Hospital No. 18 in Richmond, Virginia, on 28 December 1862 and he died on 22 January 1863. A descendant of the family shared the following on Find-A-Grave:

“Robert Isbell’s home was on the Tugaloo River near Fair Play in Pickens County, South Carolina. “My pappy owned a large plantation with lots of fine horses. But with the war [between the states] came the loss of our property as well as our father and brother,” wrote Martha Jane Isbell.

Will, Robert’s oldest son, was the first to die in the war during the June of 1862. “He was only seventeen when he volunteered for service in the Confederate Army,” said Martha Jane about her older brother. In the fall of 1862, Robert became ill and spent months of the regimental hospital. On 22 January 1863 Robert died of an unknown disease and was probably buried in the Hollywood Cemetery outside Richmond, Virginia.

Martha Jane explained what happened to the family: “Our troubles first began when our beautiful mother [Lucinda Wright Isbell] died on 25 March 1861 leaving eleven children. The birth of her last child, Wiley, in July 1860 was problematic, and Lucinda’s health never improved. She suffered for eight month before slipping away. Within weeks of her death, little Wiley also died.

At this point, Robert and his son were serving in the military, and Julia, Robert’s oldest daughter had recently married. Then next year the two men were killed, leaving the children alone. “Then our aunts and uncles met at our home,” wrote Martha Jane, “And divided us all out among themselves as they, not we, pleased. In fact, I don’t think any of us were really wanted. We were sent to different homes and told to obey. It was lots of hard work and very little education.”

Martha Jane Isbell was taken by Lucinda’s brother, James Wright and his wife, Martha. Robert’s sister, Parmelia, and her husband, Iley Coffee, took Martha Jane’s sister, Nancy Cleveland Isbell, back with them to Hall County, Georgia. Martha Jane continued: “Our separation day was a sad one. We all screamed and screamed and had to be pulled apart. It was years and years before some of us saw each other again. There were no orphan homes in those days so we saw a very hard time.”

I seat myself to drop you a few lines to let you know that I am tolerable well at this time and when these few lines comes to hand they will find you well and all of the rest of the children. I have moved again today. We have moved about five miles from where we was stationed at Camp Sidney Johnson. We have moved nearer the Yankees. I can see their ships in the ocean. We are stationed right on one arm of the ocean which is called Tugado river and there is the most fish here you ever saw and the porpoises and the most crabs. They are a curiosity. Folks eats them. They taste sorter like fish. They don’t have no guts in them and they just throw them in the fire and roast them and they are salty enough to eat without putting any salt on them.

This paper hain’t very good. There is the most sand flies and mosquitoes here I ever saw. The whole face of the earth is covered with dewberries. They are ripe now and I make pies out of them and they eat pretty well too.

Well Cat, how does Monroe ¹ look? I have forgot how you all look. I want to see you all mighty bad. Cat, you never wrote whose hair that [was that] I got in the letter you sent to me. I like to forgot to tell you I received your letter. I received them on the 4th of this inst. and I was very glad to receive your letter for I begun to want to hear from you all really bad. You said you wrote a letter once a week but I never got them. I haven’t got nary letter from you in about three weeks. You can direct your letters to Adams Run, Colleton District, S. C., — Col. John V. Moore’s ² Battalion in the care of Capt. D[aniel] L. Cox, Company D.

You said you hadn’t no paper. I will send you and Polly some in this letter and I would send a heap more if I could send it by mail but there hain’t no chance to send nothing here home. Well, I must come to a close. Nothing more at this time.

Cat, tell your grandma howdy for me and tell her I want to see her mighty bad. Tell her I am glad to hear of her going to the kitchen one more time. 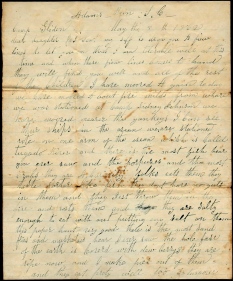 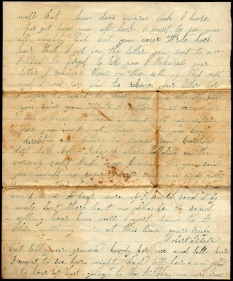