These three letters were written by 28 year-old, Canadian-born, Zephram Lariviére [or Larvier] (1835-1863) to his wife Priscilla Waters (1841-1914). The couple lived in Clarington, Orleans county, New York and had two little girls—Phylena (b. 1859) and Laura (b. 1862) by August 1862 when Zephram enlisted in Co. D, 151st New York Volunteer Infantry. “The regiment was not a military achievement, it knew nothing of war, drill, or even the necessary discipline which perfects such organizations, but behind the man was an impulse to be a good soldier who should give his life if necessary, for the maintenance of a great principle.” [Chronicles of the 151st Regiment, p. 16, compiled by Helena A. Howell]

Zephram wrote the 2nd letter from the camp of the 151st New York near Sulfur Springs, Va., on August 23, 1863. He lectures his wife about taking care of her health. Less than two months later, Zephram would be dead—a victim of Typhoid Fever. His death was given as 17 October 1863.

I am very happy to inform you that I am well & enjoying myself the best I can & I hope when this reaches you it will find you well and hearty. We have been having quite a winter here. It began to snow early yesterday morning & snowed all day and was quite blustering and cold—the worst day we have seen. But I was very lucky for I was not on guard & did not have to go out. What do you suppose I am doing now days. I’ll bet you can’t guess so I will tell you. I went down town Saturday and got a primer & am going to try and learn to read. Mr. [Almon B.] Fargo is my teacher & thinks I can learn in a short time if I stick to it. I can read quite a number of words so soon.

I came across an old friend today quite sudden. We have a shoemaker’s shop on the ground & I went to get my boots fixed and saw him sitting there and was sure I had seen him before. I called him by name [and] asked him if he did not know me, but he did not at first, so I told him where he had seen me and then he knew me. I saw him in Rochester 8 years ago. I knew him at home in Canada and all his brothers and sisters. He is a Frenchman. I spent the rest of the forenoon talking French with him about old times and tonight he is in our barracks and I had another good chat with him.

Have you got the money on your check yet? You said you was going to send it by Mr. Stilson but you did not say anything about it in your last letter. I want to know so if you have any trouble, I will get my name taken off the allotment roll.

How do the potatoes keep? Have they rotted any? And have you got more than you want. I hear that they are worth six shillings a bushel and if you have more than you want, I would speak to Mr. Stilson and see when would be a good time to sell a few bushels.

We have been brigaded and assigned the duty of guarding the Ohio & Baltimore Railroad to Frederik City and Annapolis. We are the third separate brigade composed of five regiments of infantry and one of artillery. We have got a Captain but not Mr. Bogardus. It is Captain [Isaac] Hallock just as we wanted it, but our First Lieutenant is from another company. I shall send another old letter back this time for I don’t like to burn them and it will cost nothing to send them home again. Did you have a good visit at Mr. Hains’? I hope you will get over your cold soon. You must be very careful of yourself for you know it is very sickly and a bad time of year to go out.

I have got a little hymn book such as we use here in the regiment but as I can’t use it myself, I will send it home to you, and you can let Polly learn the hymns so she can sing them to me when I get home. By the time you get this, I shall be on guard which will be Thursday & then I shall only have to drill half a day till Monday. I only have to go once a week and generally Thursday. But I can think of nothing more so I will bid you food day, hoping to hear soon.

P. S. My new friend wrote to Canada yesterday and has told his brother to inquire about my folks so I will hear soon. 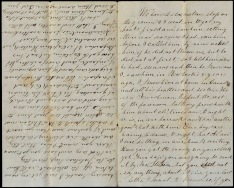 I thought that you would be anxious to hear where we are & what we are about so I propose to write you a few lines today & let you know. We are all well & still here on the heights. We have about given up all idea of being attacked here now as the Rebs have delayed it so long & we have, by entrenching ourselves & building forts & mounting them well with heavy guns, got a pretty good ready for them. Then too, we have received reinforcements to the amount of two or three thousand.

As both Generals Lee & Hooker with their whole forces are in the state now and not more than thirty miles apart, we can expect a heavy battle to come off almost any day. The Rebs are on the old battleground  of Antietam & entrenching themselves. I presume a battle will soon come off somewhere near Antietam. Our scouts & pickets bring in on an average about ten prisoners a day & today they drove in 70 or 80 sheep which they took from the Rebs. We are very comfortably situated here though we can’t of course tell how long we shall be kept here though I think they will not want to spare much of the force from here as long as there is so large a force of Rebs so near.

I received a letter from you last Thursday & have been looking for one ever since as you said there was a couple on the way for me. Yesterday we received marching orders again but they were countermanded before night. We were to go up the river to Williamsport & destroy a rebel pontoon bridge which they are using pretty extensively to run cattle, sheep & horses across into Virginia on. But I believe they have now sent a cavalry force for this purpose. So we shall probably stay here awhile longer,

When you wrote your letter you thought that Al’s wife was here, but she had started for home the day before so you see, as I only got your letter day before yesterday, it was impossible for me to send you any shells or cones even if I could have found any—but they are pretty scarce here. You spoke of my pipe that I left at home. You thought I forgot it but I left it on purpose—did not intend to bring it.

Tell Susan Haysmer & Susan Frost that I thank them very much for the letters they promised to write to me. We don’t find the time everyday to sit down & writes letters & our friends at home must not expect letters as often from us while we are out here in the field as though we were in barracks with little else to do but write.

Give my respects to Henry DeLano & tell him to write to me. Tell him I wish he could have been with us in our tramp through Western Virginia & he would have seen a good deal of country & much that would have been very interesting. Give all the neighbors my best respects & reserve my best love for yourself & the children.

Your ever affectionate husband, — Z. Larivier

I have just received that good letter of yours of August 18th & read it with much pleasure & am very glad to hear that you and the children are in good health but sorry to hear that you are working for other folks. Now Priscilla, I am going to ask a favor of you and that is not to do so any more. Soon you will make yourself sick and have a doctor and it will cost a great deal more to pay him that you can earn in all summer. You are asking me to be very careful of my health but you are not careful yourself. I will make you a present of $5 dollars if you will not work out any more but take good care of the children. I will send you 5 dollars in each letter now for some time and I think you can get along without working out.

I was taken with dysentery last Thursday and by Friday I got so weak I had to go to the hospital where I am now. I am getting better and think I will be able to go to work again by the time you get this. I have some pain in my chest & am dizzy at times. There is a good many sick in the regiment and some dying off. I think it is from marching so hard in such hot weather. You must not be alarmed about me for God watches over all and will do all things well.

How I would like to have been there & went with you after berries but be of good cheer, wife. I think I will be there to go with you next year. We hear good news every day and if things go on as well till winter, I don’t think the Rebs will fight much more.

I have had a plenty of good blackberries to eat here but they are all gone now. Al has been detailed as watchman with me and we are together again. He is well and received a letter from Laura last night. He sends his best wishes to them and you. Dan Wolfrom ¹ has got a furlough and will be at home by the time you get this and if you get your likeness taken, it will be a good chance to send it if he will bring it.

Our Captain [Isaac Hallock] came to the regiment yesterday. He has been away 2 months sick. I want you to answer this soon as you get it so I can tell whether to send anymore money and send me 1 or 2 stamps in each letter for awhile. When you write next tell me all about the trees and bees and everything. I will write soon again so good day. Love & kisses for you & the children & respects to all the neighbors. — Zephram

Monday noon. I am about the same except my head which is better and my dysentery is not quite so bad.