This letter was written by John Peyton McGuire, Jr. (1836-1906), the son of John P. McGuire (1800-1869)—an Episcopalian rector who had served as the principal of the Episcopal High School of Virginia in Alexandria before the Civil War.

John, Jr. was a son of his father’s first wife, Maria Mercer Garnett (1808-1841) who had died when he was only five years old. He wrote this letter to father’s second wife—his step-mother—Judith White Brockenbrough (1813-1897), the spinster daughter of a member of the Virginia state Supreme Court and a wealthy landowner in Hanover county.

John P. McGuire, Jr. was “a graduate of the University of Virginia and trained as a high school instructor. During the Civil War, he joined the ranks as a private [Co. A, 3rd Virginia Infantry Local Defense], but was soon assigned to the Confederate Naval School as an instructor. By war’s end he was a lieutenant in the Confederate Navy. Five months after the surrender at Appomattox, John P. McGuire, founded his school and, by teaching the sons of prominent Richmond families for the next forty years, ‘exerted an influence on the Commonwealth of Virginia hardly second to that of any man.'” McGuire’s stories in the classroom of Lee and the Lost Cause ideology were so compelling that one of his students went on to produce one of the most exhaustive studies of Robert E. Lee ever published—that being the 4-volume biography of Lee by Douglas Southall Freeman.

John was married in 1860 to Clara Forsyth Mason (1840-1877) whose parents, Murray D. Mason and Clara Cecelia Meigs, were apparently in Danville where this letter was addressed.

When the Civil War began, McGuire’s stepmother Judith started keeping a diary that was published in 1867 as The Diary of a Southern Refugee. Her diary began in May 1861 with the breakup of her family. The following piece describes her diary:

“Rev. McGuire and the boys had enlisted while McGuire and her daughters were forced to leave Alexandria when federal troops occupied the town. “I am keeping this [diary],” she wrote, “for the members of the family who are too young to remember these days.” The days to which she refers seem filled with movement and insecurity. The family traveled south through the Virginia countryside to Richmond. Along the way they stayed with friends and relatives, but, McGuire recalled, “while [their hospitality] is very gratifying, and delightful, yet we must find some place, however small and humble, to call home.” By February 1862 they were in Richmond, trying desperately to find a home. Since Richmond had become the seat of the Confederate government, the city’s population had doubled and lodgings were at a premium. After being refused board at several homes, McGuire was finally offered rooms at $3 less than her husband’s monthly salary.

“Finding the Confederate capital too expensive, McGuire and her daughters were on the move again, settling first in Lynchburg and then in Charlottesville, Virginia. There she hoped to get work in the Treasury Department, signing government notes. But widows and orphans were given preference for government jobs, so the family supported itself by making and selling soap. In November 1863 McGuire obtained a clerkship in the Army’s Commissary Department. Like the other 35 refugee women, she worked from 7:00 a.m. to 3:00 p.m. daily and received $125 per month in depreciated Confederate paper money. In addition, she worked evenings as a volunteer nurse in local hospitals.

“The diary ends abruptly in May 1865 with the notation that General Joseph E. Johnston had surrendered his army on April 26: “My native land, good night!” We do not know what happened to McGuire after the war, or whether the family was able to return to Alexandria. The end of her life, like the beginning, is a mystery. Unlike many of the other Confederate women whose diaries have been published, McGuire did not move in high social circles. Her diary does not record the comings and goings of the Confederacy’s military and social elite. However, The Diary of A Southern Refugee is perhaps more valuable than other more widely known diaries because McGuire’s experiences are more representative of the war’s effect on Southern society. It is difficult for modern readers to imagine the constant fear and uncertainty under which most Confederates lived. They not only feared for their own safety at the hands of an enemy they believed was inhuman and for the safety of loved ones in the army, but they wondered where their next meal might come from, or whether they would have homes when the war ended. The refugee experience was far more common than most historians have realized, and McGuire’s diary allows us to relive part of it.

“The tone of the diary varies. At times McGuire is a dispassionate observer, merely chronicling the events of the war. At other times, she allows the reader to share her emotions. These latter passages are infrequent, as though McGuire feared to let herself feel too deeply, but when they occur, they are moving and effective. It is unfortunate The Diary of a Southern Refugee has been overlooked for so long.”

John’s father was appointed a chaplain of the Officer’s Hospital at Richmond on 10 December 1863. After the war John’s parents kept a school in Essex county in the 1870s.  His stepmother, Judith, also published a book entitled, General Robert E. Lee: The Christian Soldier (1873). 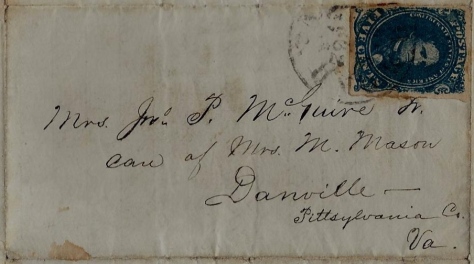 In one of the letters which [       ] to me yesterday morning (not this morning), she says that she does not allow herself to think that [        ], I am free to say that I am intensely anxious to see her & that it has been in my brain to satisfy this longing even by going to Danville. That if course is impossible but I wish it were not so. The Capt. proposes to go down next Saturday and if nothing happens to prevent, I shall commission him to bring my [   ].

What may occur in the Yorktown section, I cannot tell but I do not expect a direct attack there, which course will but prolong our suspense. What the Virginia [government] is doing is more than I can say—some good I hope. The croakers are in full cry today over a dispatch from the West that “the advance of Buell’s army had compelled Beauregard to retire to his old position without having time to reap all the fruits after his victory,” or something so. This, the owls says of course, means that the enemy have retaken all the prisoners, stores &c. &c. which it does not mean. Not as far as I can learn is it a fact that Buell has even crossed the river, but only that Beauregard’s fall back was necessary to put his army in fighting trim after a ten-hour’s battle [Battle of Shiloh] and subsequent pursuit of the Yankees, which could certainly produce a vast deal of disorganization in the loss of officers & need for putting others in their places, killing of artillery horses and need to get others, and all other casualties of even successful battle which must be remedied if possible before throwing the tired troops upon another army which must be at least equal in numbers.

The falling back of itself is a loss of some of the fruits of victory because if the enemy had not advanced, all might have been made ready in the new positions, and among the quantities of stores taken, it is no doubt certain that we had not time to bring anything away. But for the 5,000 prisoners, they were sent to the rear as fast as taken and are well there now, I venture to say. I do not expect Buell’s army to escape the fate of the other, but “let us pray” so much.

I have another [     ] the war, thinking all the time how much you [   ] as I was coming home? Today I caught myself [     ]. I know that I did right with the lights then before me,” but I am so provoked as each day passes and Richmond is still as undisturbed as Danville. I do not know where the Government will go if Richmond becomes untenable. If I did, or if its members would even talk of their plans, I might make some arrangement by which you could come to me & stay until the general “Hegira.” The weather & my cold have compelled me to spend all my spare time at Mrs. Davis but no wife to comfort me. If I did wrong, I am well punished. Are you glad of it, dear? Well, Adieu. I hope to be relieved shortly. Until the end of that time & my life, I am [     ].

Spriggins tried to come and I was surprised at not hearing from it until I found last night that Mrs. D is charging $1200 for the front room. Therefore, of course, we did not get any Spriggs by may get a Forrest or two instead; at least Capt. Forrest has it under consideration, and Mrs. Forrest is very anxious to come to the dear old Commodore. It is probably the best that we can do and I have lent my aid in the matter.