This letter was written by William Henry Wilson of Co. G, 32nd Ohio Veteran Volunteers. The regimental history gives his enlistment date as 1 August 1861 and his re-enlistment date as 17 December 1863. In one of the few such comments added to the company roster, “Henry” was described as “a good soldier and had lots of fun” (see below). He mustered out with the company at the close of the war.

“Of the men whom one remembers because of some traits peculiar to themselves, I might mention Henry Wilson, who turned everything off as a joke, and under all kinds of circumstances would sing and dance, and say: “Who wouldn’t be a soldier?”

I received your letter a few days ago and now I seat myself to pen you a few lines. Your letter found me well but pretty nigh wore out for we just ended one of the hardest campaigns we ever seen in this war. We were on the march 54 days in that time. We marched through the State of South Carolina and to the center of the State of North Carolina. Well, I will try and give you a little of our march.

We left the coast on the 29th of January. We marched 15 miles every day till we were forty [    ] where we found the enemy in our front. They were on one side of a big swamp [Salkahatchie] and us on the other. We laid one day in front of them and tried to shell them out [but] we could not do it. So the next morning we crossed a swamp 2 miles wide and we had to wade waste deep in water. We were 3 hours a doing it. We had to move in line part of the way and we drove the enemy without much fighting. Then we moved along till we came to Orangeburg [on 16 February] where we had another little fight across a river but we soon drove them there.

And then our next place was Columbia—the Capitol of the State. We had to cross the [Congaree] river there. We had some pretty hard fighting there to effect a crossing but we done it up gay. We moved across the river about dark. We were into camp close to the city and then we went up in town and got something to drink for there were plenty there of all sort. You better believe there was a drinking time. We burnt every house in the city and [had] a warm time.

Then we left them [at Columbia] and marched on several days before we found any enemy in our front. Then the foragers drove [    ] time. When we came to a place [on 3 March] called Cheraw. We had a little fight with them there but we made them get up and dust. Then we moved along the line into North Carolina. There we had to stop our burning.

There was 75 mounted from our regiment to make a raid of 40 miles from where we were moving. I tell you, we had gay times. We captured 300 head of mules & horses, and negroes—we could not count them. I seen some of the best looking girls on that march I’ve ever seen and some of them were what I call Union girls for there were  several come with us through to Communication and then went North. We had no fighting till we come in 20 miles of this place [Bentonville] when the Johnnies thought they would stop General Sherman but Sherman could not see the point in stopping. We give them a good whipping. They left on the field dead 1,000 and a great many wounded.

We are now in camp and expect we will stay here about 6 weeks, and then we will move into the Confederacy some place and I expect we will see some hard fighting but it will end the war. I think the Johnnies are about gone up the spout and this war will soon be over then.

I am going to have another big time in Roseville [Muskingham county, OH] and then I will leave that place for some other place of the world. Maybe I will come somewhere through your country on my route. If I do, I want to find Old John all right on the goose and we will have some of our old school days over in a new way. I have not heard from home for some time. I don’t know what they are doing there. I suppose you know that Henry Axline [is] at home again. ¹ Look for him to be married soon to Miss Sadie Lowry.

John, I was thinking of some of the times we had together but them days are now gone and us several miles from each other—and seeing some of the damnedest times a man could see. To tell the truth, I am tired of this war and don’t care how soon it is over. If I do live it through, I will think I am among the lucky ones.

Well John, about that sister-in-law of yours, I am afeared it will be no go. I would like to be a birth relation of yours but I am afeared I can’t come in unless by some of your help—if then. The girls about Roseville are all butternuts and I can’t go there now. I have got several relations now [that] won’t claim [me] anymore because they are butternuts. Don’t you think I am right in doing so?

Well, John, I will have to bring my letter to a close for this time. Walter Lowry & Lou Vickers ² sends their best wishes to you. You must look over this bad writing for I have such a bad place to write and such a poor pen. John, when you write, give me all the news and next time I will try and do better for I will have some better paper and I will close by saying goodbye.

I am your true friend and well wisher, — Henry Wilson

¹ Henry Axline of Muskingum county, Ohio, served in Co. G, 32nd Ohio, with Henry. He mustered out of the regiment at the end of his term of enlistment at Chattanooga in August 1864. He later resided in Zanesville, OH. 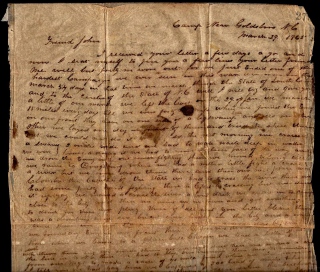