These letters were written by George L. Covert (1843-1908), the son of Harry and Orthia (Field) Covert. George enlisted on 12 September 1861 in Co. C, 7th Pennsylvania Cavalry and was taken prisoner at Gallatin, Tennessee on 21 August 1862. After four months, he was exchanged, and he then joined his company at Nashville. On 28 November 1863, he reenlisted at Huntsville, Alabama, as a veteran volunteer.

On 20 June 1864, he was wounded in the fighting at Noonday Creek near Kennesaw Mountain, Georgia. He was shot through the left lung and left wrist and remained in a hospital for several months recuperating.  He was honorably discharged from the service on 5 September 1865.

After George returned home from the service, he attended the State Normal School at Mansfield, Pennsylvania, and then taught school until 1871 when he purchased a membership in the Williamsport Commercial College. He then took up telegraphy and worked for the Western Union Telegraph Company.

In 1884, he married Mary J. Merriam of Wellsburg, New York, and then entered the mercantile business. [Source: History of Bradford County by Henry C. Bradsby]

Yours of the 8th came to hand yesterday. I now reply to it with the greatest of pleasure, improving the earliest opportunity [and] hoping this may find you in good health and enjoying yourself likewise the same.

It is evening. Twilight has scarcely died away. The stars shine with brilliant luster on a land of strife. The moon throws its silver light in[to] some lone cottage window where no solitary sound is heard but the whistle of the shrill winds that rustle through fallen leaves of autumn. If I mistake not, I am writing by candle light [and] liable to cross a line.

The bugle has blown for roll call—I must hasten to hear my name called.

You wrote that you thought it was most time for me to come home on a furlough. If I feel so disposed, I can have the privilege of having a furlough by being so kind and condescending as to aid and assist Uncle Sam for the short term of three years longer with the inducement of $400 and some odd bounty. A few flattering words will turn some people over. There is various ways being presented to the soldiers for to get him to reenlist—by coaxing, scaring, or daring. There is 150 reenlisted out of the regiment—8 of my company—and likely to be more. I have not come fully to the conclusion not to reenlist for it is my candid opinion that this war will soon end. The signs of the times indicate it, all nature speaks it—however, that does not make me any the more anxious to reenlist.

There is a debate going on here now. I must stop writing and be all attention. The question is, “Resolved, that the signs of the time indicate an overthrow of the government.”

Sunday the 20th. Not having time to finish my letter last evening, I write a few words and close. The last evening’s question was decided on the negative and I could have told that before it was debated.

Here I stop and go to church at 9 o’clock. Yours respectfully, G. L. C.

My pen drops and the writer stops. Hoping to hear from you soon, I bid you good day. 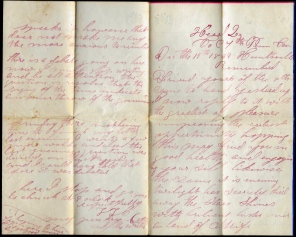 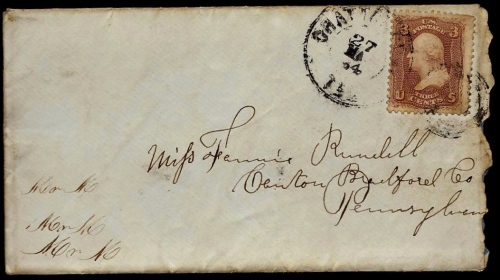 I have no time to lose or surely any to spend in writing or etc. my own service. I am still alive & in good spirits and generally good health but nearly worn down with fatigue. We have been continually going ever since [we] left Columbia 30 of April marching, countermarching, etc. and going ahead, flanking and fighting the rebs more or less during which we have made good progress and drove them.

We drove them from Tunnel Hill, Dalton, Rome, and Kingston. Took Kingston on the 18th. We are now about 100 miles from Atlanta. We will start soon driving Johnston’s Army into Atlanta where we will have one big fight and give them one deal of a thrashing if we don’t get defeated. We are now in full possession of the railroad through to Chattanooga and there has a train just come in for I heard it whistle. Now we may get some mail which we haven’t had in a long while.

Fanny, I received your letter of the 22 on the 5th of May. We got our mail as we passed through Stevenson. I did not know that you had remembered me long enough to be so grateful as to write me a letter. I thank you very much. I think you are quite kind and I will repay the compliment by answering it at the earliest opportunity which happens to steal along today.

Where there is a will, there is a way. I had no ink to write with but I found a way to get some and it saved me the trouble of writing with a pencil. We have inspection [at] 11 o’clock. How I wished I was at home to go somewhere. I know but it is not my place to home or no other young man. He should be down here fighting for his country sharing the fate of a soldier. Hain’t I a patriot chip. I guess I will do to go home and live a retired life. I don’t like soldiering any better than anyone [but I] have to lump it.

We are to leave here tomorrow morning, [rise] early [at] three o’clock, move out [at] 5. Sending all sick to the hospital—Albert Newell is one of Co. C. 20 days rations. Look out for hard times. This spring campaign has accomplished more than any during this war so far and I think it will continue to. I dare presume to say, Fanny, I would like right well to come up and visit your school. Perhaps I will but I will let you know that I am coming if I do.

[Robert A.] McMahen is in Co. D, 7th Pa. Cavalry. I aw him every day before we left Columbia. His company is detached for General Garrard’s escort, commanding the Second Division’s Cavalry. [My brother] H[enry] D. [Covert] is well and sends his love.

Excuse my pen. Also this short letter and poor writing. Return good for evil and write a good letter with more love in than this. I remain as ever your affectionate friend. Write soon and oblige. — G. L. C.

My love to your folks. Direct as before. Write pretty soon. To Fanny. 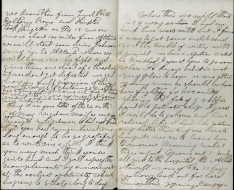