This letter was written by George Washington Peck (1840-1862), the son of Charles B. Peck (1811-1881) and Stata Coe (1810-1874) of Jewett, Greene county, New York. George enlisted on 24 November 1861 as a private in Co. A, 90th New York Infantry—sometimes called the “Hancock Guard.” The regiment embarked from New York City on 5 January 1862 for Key West, Florida, where it performed garrison duty until early 1863. Three hundred members of the regiment died from disease while in Key West, including George who succumbed to yellow fever on 16 October 1862. 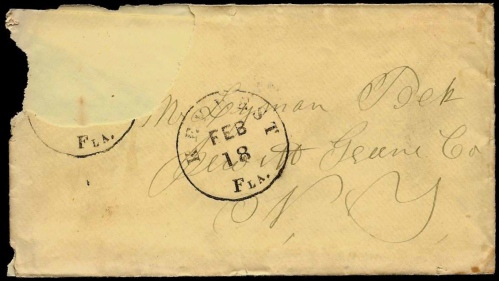 As we had got ready to go out on dress parade this afternoon, to my great surprise I saw the post boy come in to camp with a bundle of mail for the regiment and amongst the rest was your letter which I was much pleased to get although I had to exercise some patience for I had to wait until after parade before reading it. Last Thursday the mail came in and I received a letter from [sister] Kate and I have written an answer but have not mailed it yet.

You wish me to give a description of my trip from New York to this place so I suppose I shall have to comply as far as in my power. When we went from East New York to Governor’s Island, we did not expect to stay there but a few days. But alas, we were doomed to disappoint for we stayed there about four weeks when finally, all things being ready, we pulled up and started for the dock where we took the ferry boat and steamed up to the foot of Warren Street. We marched aboard of the old craft that was to bear us far from home and friends.

Well, the next morning was Sunday and a cold day it was too. We got under way at about 11½ o’clock and started for this place. It was a rather solemn scene when we took the last look of the great Metropolis of the North. Well we soon passed Sandy Hook with Fort Lafayette on one side and Fort Hamilton on the other with those iron monsters pointed at us as if to defy every vessel to pass with[out] speaking a word to them—just to set us to thinking we would be in the vessel that undertakes to pass that point if these iron monsters should take it into their heads to speak a few words to them.  Well, these sights were soon out of sight and on our east burst into view the vast expanse of waters which form the ocean. Truly no one can have any idea of the grandeur mingled at the same time with fear that he is out of the reach of terra firma. But just as the highest peaks of mountains in New Jersey were barely in sight, the sun set and darkness enveloped the face of the deep and we had no other alternative than go and find my bunk and turn in which is no small job, I assure you, among such a jam as there was on board the ship. But I finally succeeded in finding it and turned in to spend my first night at sea but it was almost a sleepless night for me.

Well I was up on deck the next morning at the break of day and imagine my feelings when to my surprise there was no land in sight. Well I was pretty sick all that day, I can tell you, so I went below and went to bed and stayed all that day and night. But when I got up the next morning, I felt more like myself again and was not sick again on the voyage. Well everything went along about the same way until we got here. Almost every day we could see a sail at a great distance. They looked more like small specks than like large ships, the distance was so great between us. After the fifth day out we began to see flying fish—plenty of them too. They would dart out of the water and fly about six or eight rods and then dive into the water again and be out of sight for a moment. We also saw plenty of porpoises. They seemed to go in droves and I would judge that some of the largest of them would weigh 100 to 150 pounds and they would bound out of the water as much as 4 or 5 feet and then dive and be out of sight a number of minutes and then they would appear on the surface again.

But I guess I will close my description by saying that after eight days sail, we landed at Key West where we now are.

Well, Lime, I was quite surprised when you told me that you was so enamored with Lottie’s charms. I shall expect that the next news I hear that you are joined in the Holy bands of matrimony/ Well, all I have got to say, it is not likely will alter the case any now. I am sure I have no claim on her and so go in your biggest licks. I do not know when I shall be home again as Alf. and I talk some of going to California if we should live to the end of the war. But enough for the present. So give my love to Lottie and all our folks. Save a good share for yourself.

Write as soon as you get this and write all the news. Tell ___ to answer my letter if he ever ever gets it. Tell them all to write.