This letter was written by William De Wolf Peck (1832-1895), the son of Nicholas Peck (1788-1838) and Nancy Ann Bradford (1795-1889), natives of Bristol County, Rhode Island. Nicholas Peck fought in the Texas Revolution, coming to Texas in 1832 in Capt. Mosely Baker’s company at San Jacinto. For his service, he was granted land by the Matagorda County board of commissioners. It was here that he brought his family but died in 1838 at the age of 50.

Nicholas and Nancy’s youngest son, William served in the Confederate Army, first in Ben McCulloch’s volunteer company, which seized government property in Texas, then in Co. F, Nichol’s Infantry Regiment, Texas Volunteers, and finally in Cavalry Co. D, Battalion of Waul’s Texas Legion as First Lieutenant and later as Captain. From 1861 to 1865, William Peck participated in several battles and military engagements including the capture of Holly Springs and the battle of Fort Pillow.

Following the Civil War, William Peck recommenced his mercantile business in Gonzales, first under the name Peck & Evans, with his partner, A. G. Evans, and after 1875 under his own name.

William wrote the letter to Willis Berry (“W. B.”) McCormick (1818-1887) and his wife, Ann Virginia Millan (1822-1877), who moved with their family from Fauquier county, Virginia, to Colorado County, Texas, in December 1858. In 1861, W. B.’s son, George McCormick (1841-1905) enlisted in the Confederate Army in Galveston, where he helped build defensive sand works at Fort Point and South Battery. He soon reenlisted in Co. D, cavalry battalion, Waul’s Legion. In July 1864 at the battle of Harrisburg, near Holly Springs, Mississippi, he was wounded, captured, and suffered the amputation of a leg. After returning to Colorado County in 1865, George studied law, obtained his license, and joined the prominent legal firm of Cook and Collier. He was elected county clerk in 1866 but was declared ineligible and removed from office in 1869 for failure to swear the “iron-clad oath” required of Reconstruction officeholders. Thereupon McCormick resumed the practice of law in Columbus with partners R. L. Foard and Wells Thompson.

Hearing that there was a chance—or would be a day or two to send letters across the Mississippi River, I avail myself of the opportunity to drop you a few lines to let you know how [your son] George is getting along. John Frazier ¹ reported to the command the latter part of August as he did not think it necessary for him to stay with him any longer as he considered him out of all danger and did not require any attention nights. He said that his leg was healing up very fast—that his appetite was very good—and his general health very good and thought that he would get along without any further trouble.

I received a letter by him from [your son] George. He wrote in very good spirits and thought that by the middle of October that he would be able to go about. He was very anxious for me to drop you a few lines the first opportunity—that he would [write] himself but could not hear of an opportunity to send letters across the river. He is still at Mr. Saunders about four miles west of Tupelo—the place that he was first left at. Was not moved to the hospital as I wrote you in my last letter that he would be as the Surgeon did not think it advisable for him to be moved at that time. He is very kindly treated and has ever attention Mr. Saunders is a poor man but very kind-hearted and does all that they can to make George comfortable.

Stephen is still with him and will remain until he is well. I have not seen him since a few days after his leg was amputated [and] have been very anxious to go and see him but it is impossible to get a leave of absence for General Forrest keeps us very busy either fighting or moving about nearly all the time. Since I wrote you last. we fought the enemy in North Mississippi about sixteen days, mostly skirmishing. Our Battalion was very fortunate having had only one man wounded, none killed during the whole time, but lost quite a number of horses.

There is no news here. All of the outer fortifications about the city have been captured and are in possession of the Yankees but no immediate attack is anticipated on the city. It does not look much like war times in Mobile. The stores are full of goods of all kinds but are selling at the most extravagant prices. For instance, mens shoes from $50 to $150 a pair and boots from two to three hundred dollars a pair, and all other kinds of goods in proportion. The poor soldier stands but a poor show to make any purchases here.

Our Brigade has been transferred to General Thomas at this place and I learn that General Forrest has taken the balance of his cavalry and gone into Tennessee, I presume to work on Sherman’s rear. You need give yourself no uneasiness about George as I feel satisfied that he will soon be well as he is improving so very fast and will soon be able to get about. He has some very kind friend in Mississippi. Some of them have left very pressing invitations for him to make them visits and stay as long as he pleases as soon as he is able to get about. 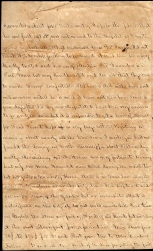 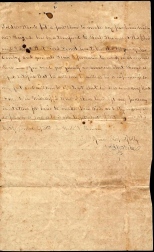