This letter was written by 15 year-old David M. Simpson (1844-Aft1870), the son of Joseph L. Simpson  (1795-Aft1870) of Rock Mills, Anderson county, South Carolina. David served in Co. C, 4th South Carolina State Troops which was led early in the war by Capt. J. Thomas Dean from Anderson county, S. C. The company was accepted in state service at L Haynie’s Old Field, four miles south of Anderson Courthouse, Anderson District, South Carolina, on 3 January, 1861, and was mustered in state service for one year at Pendleton, Anderson District, South Carolina, on 14 April, 1861. It fought first at First Manassas under N. G. Evans where it had 11 killed, 79 wounded, and 6 missing. In April of 1862, the regiment had 450 men. If was consolidated into five companies and redesignated as the SC 4th Infantry Battalion. 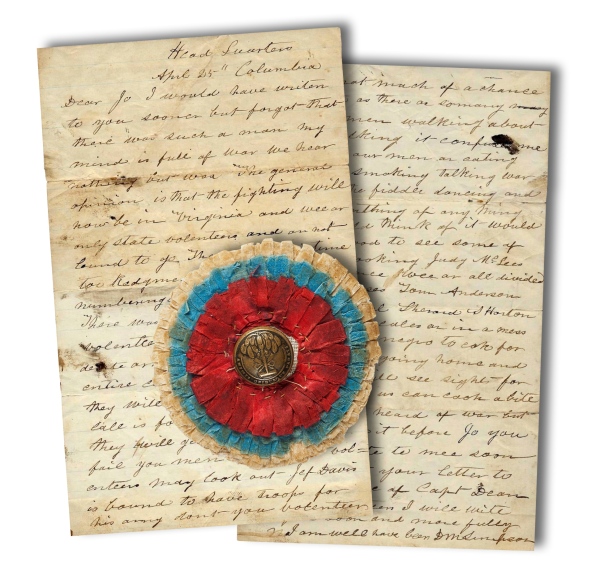 I would have written to you sooner but forgot that there was such a man. My mind is full of war. We hear nothing but war. The general opinion is that the fighting will now be in Virginia and we are only state volunteers and are not bound to go.

There is at this time two regiments in this place numbering 2,200. We have lively times. There was a call made today for volunteers from here for the Confederate army but they only got one entire company. How many more they will get, I can’t tell. The call is for 8,000 but I don’t think they will get 300 and if they fail, you men who are not volunteers may look out. Jeff Davis is bound to have troops for his army. Don’t you volunteer.

I have not much of a chance to write as there are so many men walking about and talking—it confuses me. Some of our men are eating, drinking, smoking, talking war, playing the fiddle, dancing and doing something of anything you could think of. It would do you good to see some of the boys cooking—Judy McLees for instance. We are all divided off in messes. Tom Anderson Holland, I[saac] Earl Shirah, S. Horton, & John [Fleetwood] Clinkscales are in a mess and have a negro to cook for us but he is going home and then we will see sights for not one of us can cook a bit.

I have often heard of war but never realized it before, Jo, you must write to me soon and direct your letter to me in care of Capt. [J. T.] Dean, 4th Regiment Volunteers. I will write to you soon and more fully. 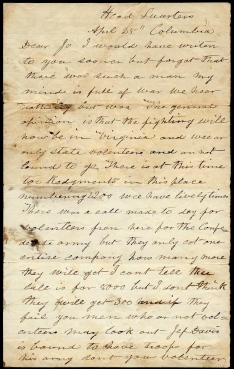 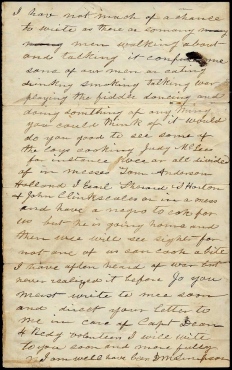