These two letters were written by Cyrus Blue (1836-1865) who served variously in Companies F, H, and finally A of the 57th Pennsylvania Infantry. At the time this letter was written in January 1862, he was in Co. D and encamped near the Blandensburg Road, northeast of Washington City.

[Note. The envelope has a March postmark on it and was not used to send this letter.]

My dear Father and Mother,

It is with gratitude that I sit down to answer your letter I received of the January 10th, night before last, and was very glad to hear from you and to hear that you were all well and in good health. I am rather better of my cold. I have had a very bad cold and it gave me the phthisic a little too. I have had quite a bad cough with all the rest but I am a little better so that I am around. I am on police [duty] today.

The boys are all in good spirits here. Father, we are camped right in the sight of the City of Washington. The Capitol is a very nice building. It is quite a sight to go up on the Capitol and look down over the city and on the Potomac river. You can look across the Potomac river and see our camps and you can’t look look s muss of camps. It beats all you ever see. There is soldiers in every direction—camp after camp. You can see team after teams. I have seen the road full of teams for a mile at a time, four horses to a wagon or six mules to a wagon. You can see strings of horses and horsemen every day. I have seen perhaps more than I ever should upon Long Run but all together likely.

I should [have] fared a little better at home although I have not been homesick yet. I do not know how soon I shall come home now but the probability is that we all shall be home before a great while in three or four months at the most if the Secesh don’t kill us before that time or some disease get hold of us and take us away. However, we shall have to chance it. We shall do the best we can to prevent these things and take the best of care of ourselves we can.

We have not had any sleighing here this winter yet. It rains here today. It is quite warm today here.

I have seen quite a number of boys that I am acquainted [with] since I have been here. It is rather lazy business here when a man is well but if he is sick, then it is hard. We have plenty to eat here now. Uncle Sam is quite clever. He has given us all two suits of clothes—one common suit and a dress suit to wear on dress parade. We are well clothed and well fed. Some of the boys are a getting fat a laying around doing nothing, as you may say, although we do drill as usual a few hours every day.

Father, we have got some very good rifles. They shoot first rate. We went out the other day. We made some good shots about sixty rods. They carry up first rate. They are a good-looking rifle. I should like to own one of them myself well enough.

We have had as many as eighteen of the boys in our tent to sleep at [one] time so you see we are not lonesome here. We have fifteen in our tent now. I will give you their names: Truman C. Middaugh, Alanson Gridley, C. M. Love, William Odell, Hamilton Betts, A. S. Babcock, Chancy Brace, William C. Cates, Seymour Ingalls, Walter White, R[ichard] P. Managan, Eli Pritchard, George Streeter, H[arry] W. Babcock, Cyrus Blue.

I understood you have been a trading horses. I wish you would tell me what for a trade you made when [you] write again. Father, I wish you would keep that ____ of mine. Uncle Isaac wrote to me that he wanted it but I guess you had better keep it & not let it go. Tell Ed that I am sorry that he is up a stump but I think he is foolish to talk on about it. Write often. Give us a full letter. Fill it up full. Spare not the pen nor ink or paper. Yours truly, — Cyrus Blue 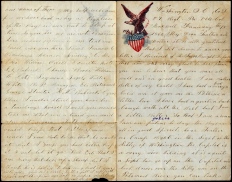 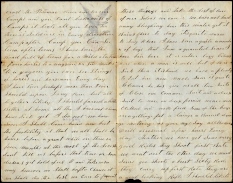 [Note: this letter has the signature of Henry (“Harry”) W. Babcock on it and I suspect that he was the one who actually penned the letter for his comrade Cyrus Blue. Harry also served in the same company.

I received your kind letter of February 14th and was very glad to hear from you and to hear you was well. I am well. I feel better than I have in a goos while before.

We have advanced since I wrote to you before. We are in Virginia now among the Secesh. The day we marched from Washington, the mud was half way to our knees and the most of the boys had to have the teams draw their knapsacks before they got through. And when we got through, we had to go and get some brush to lay down in the mud so we could lay down without laing in the mud. But we slept first rate. The next day it rained all day long. the mud was shoe deep. We only went some thirteen miles from where we was before.

I shan’t write a very long letter this time for the mail is a going out early this morning. I will send you [my] likeness but I did not have any frame on it for I thought I could send it better without. So you can get a frame for it yourselves if you wish.

No more at present. From your son, — Cyrus Blue

To Levi Blue and Lucinda Blue

Write as soon as you get this. Yours truly. Direct to Alexandria, Virginia, Co. A, 57th Pa. Vols. , William Maxwell 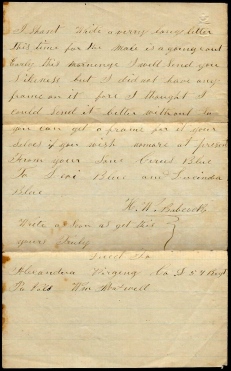